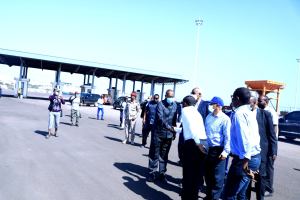 The President of the Republic H.E. Musa Bihi Abdi who is on an official visit to Djibouti since the middle of last week has visited the ultra-modern Djibouti ports of Tajoura and Gubeet to see how the state-of-arts harbour works.

Earlier on upon arrival in that country, the President held lengthy talks with his Djibouti counterpart H.E. Ismael Omer Guelleh at the presidency to re-invigorate the bilateral relations between the two nations, which has a long history of inter-twined cultural heritage and trade relations.

The Djibouti water, livestock and fisheries Minister Hon. Mohamed Ahmed Awale was at hand to conduct the head of state’s tour at the harbours.

With them were also the Djibouti port chief Abubakar Omar Hadi and Col Mohamed Jama Duale, a Djibouti Military Commander.

The President has in his delegation to Djibouti, the Minister of Foreign Affairs Hon. Yasin M. Hiir (Faratoon).

The Head of State, Mr. Ismail Omar Guelleh, received this Wednesday, at the end of the morning, at the Palace of the Republic, the President of Somaliland, Mr. Moussa Bihi Abdi, on a working mission to Djibouti.

During this meeting, President Guelleh and Mr. Moussa Bihi Abdi spoke of the strategic partnership between the two parties, especially in the field of security, strengthening of peace and stability in the region.

The security and stability of the region are two crucial issues for our country, a privileged platform for the settlement of disputes and the search for consensus conducive to peace in East Africa.

The choice made for the Republic of Djibouti to host the recent decisive IGAD summit which devoted a large part to the dispute between Kenya and Somalia, perfectly illustrates the role of promoter of peace and stability devolved to our country in the Horn of Africa.

Apart from issues related to peace and regional stability, the meeting between the Head of State and Mr. Bihi focused on ways and means to establish a new system allowing the two parties to facilitate economic exchanges. and commercial at the Loyada land border. They also agreed to strengthen partnership links in the water sector.

It should be noted in passing that the President of Somaliland is accompanied by a large delegation including his Minister of Foreign Affairs, Mr. Yacin Hadj Mahamoud.

Note that the representative of Somaliland to the Republic of Djibouti, Mr. Abdoulfatah Said Ahmed, took part in this interview.

On the Djibouti side, the Minister of Foreign Affairs and International Cooperation, Mr. Mahmoud Ali Youssouf, the Minister of Agriculture, Fisheries, Livestock and Fisheries Resources, Mr. Mohamed Ahmed Awaleh and the representative of the Republic of Djibouti to Somaliland, Mr. Houssein Omar Kawalieh, participated in this meeting.