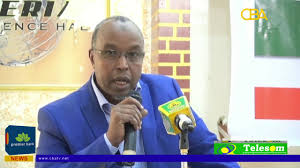 A one day conference where stakeholders disscussed the governments vision to eliminate hunger was held today in Hargeisa.

The ministry of Agricultural development and the governmets international partners deliberated on ways to accelerate efforts to end food insecuirity in the country.

Led by Somalilands director General at the ministry of agricultural Dr Ahmed Ali Maah, stakeholders at the meeting discussed ways to align the governments plan and the United Nations Sustainable development goal number 2 which seeks sustainable solutions to end hunger in all its forms by 2030 and to achieve food security.

Agriculture is an important economic activity in Somaliland not only in terms of meeting the food needs of the population but also in terms of generating income through crop sales and agricultural labor opportunities.

The ministry of agricultural development of the republic of Somaliland says food insceuirity is one of the biggest challenges of his ministry.

Speaking when he met key agricultural stakeholders at a meeting in Hargeisa, The director general of the ministry of agricultural development said the recent droughts caused by the climate change have caused the reduction of food production in the country.

Ahmed Maah also stated that the recent heavy rains have seriously affected the quality of soil in the country.

Food production is low in Somaliland which has a population of close to 4 million.

Stakeholders at the meeting intend to make locally produced improved and certified seeds available to farmers. They believe this will reduce dependency on imports and respond to both the demand of the agriculture sector and emergency situations.