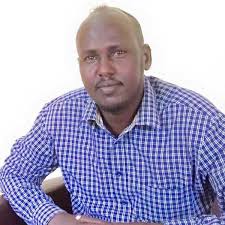 The National Human Rights Commission visited, for a second time, Mohamed Sidik Dhamme a Youth Wing Leader of opposition party of Waddani on 28th may 2019, who is in custody in Hargeisa Central Prison to observe his condition. Mr. Dhamme was arrested on 1stMay 2019 from his house at the lunch time (1:30PM) without a court warrant as he assured to the commission during interview with him. Dhamme was arrested for a Facebook post criticizing the state of emergency imposed by the president of Somaliland on three districts of Sanaag region.

“At 1:30 pm a police armed with guns came to my house; children and family members in the house were shocked.  4 soldiers entered my room and ordered me to follow them. I asked whether they had a warrant to arrest me. They said “No,” but followed them.” He continued with his statement “More than 10 soldiers were around the house and were looking out and waiting for those inside the house who were assigned to arrest me”.

Furthermore, Mr Dhamme stated to the Commission that the police officers asked him several unreasonable questions.

“On the way to the police station, they asked me several irrelevant questions such as; what do you do? Do you know that your party is wants to destroy this nation? Why do you say that the election was not free and fair? And many other questions.” Dhamme said.

In addition, the interview the commission had with Mr Dhame stated that, while in the police station, he was kept in a dark room without hygiene filled with dirt sticks and urines for three consecutive days… “I was put in a dirt dark room and filled with urine and sticks, no water and no bed, and I asked them to bring me water and talk to my family to bring me some clothes and bedsheets. They refused all requests I submitted to them for those three days “. He added, “During my stay at the central police station, the police had been abusive and harassed me trying to kill me psychologically”.Finally, Mohamed Sidik Dhamme confirmed that on 4 / May / 2019, he was brought to the court and he was remanded by Hargeisa Regional Court for seven days in prison pending a police investigation and has not been brought to the court again. Mr Dhamme Confirmed to the commission that he had 3 lawyers, his health condition is good and he has access to medical services, if he needed, a place of worship and physical exercise.“The custodial corps treat us with respect;, we have enough water, regular exercise, a good place to meet, with my lawyers any time I need them and whenever they need me, family visits and anyone who needs me to visit me. During my stay here I learnt a lot of Islamic governments history such as ummawiyeen and abbaseyeen governments and interpretations of the Holy Quran. Prison officers treat inmates well, they are trained and understand the rights of prisoners that they are responsible for.”. Dhamme said.

Therefore, Somaliland National Human Rights Commission call on the police, prosecutors and others involved in the Dhamme’s case to speed up the case investigation and avoid any unnecessary delays or prolong his stay in prison without conviction otherwise it would be a violation against his rights- justice delayed is justice denied.

The SLNHRC has visited Abdimalik Muse Oldon in Hargeisa Central Prison on 28thMay2019 to know about his condition. Abdimalik was arrested in Burao on 17/4/2019 by the police without a court order or warrant at 8:30 PM, and the same night he was transferred to Hargeisa. “The police have arrested me around 8:30 Pm on the 17th April 2019 and brought me to the central police station in Burao. At 12:00 AM, a vehicle with soldiers led by the commander of the central police station, came to see me and ordered me to come with them. Then they picked me up and sent me to Hargeisa. Around 4:00 Am brought me to Criminal Investigation Department (CID) center in Hargeisa. I have spent a half an hour at the CTU Center in the CID, and then was transferred to the central police station in Hargeisa “Abdimaalik said.”I was out of the country for a year and a few months, because I was afraid of being arrested. I decided to come to the country to defend myself against all accusations against me” he added.

Abdimalik Oldon also confirmed to the Commission that his arrest was a reflection of the allegations against the Somaliland Police Forces and other articles on which he expressed his opinion. “I guess my arrest is a reflection of some criticism I have published and posted on my Facebook account against the police which I mentioned that they regularly infringe on  the rights of their own people. Also I published a few articles on Facebook expressing my view of the country’s leadership. The motto of these articles were “This regime keeps on the tracks of failure regimes ”  which I mean there is an abuse and human right violations such as limiting freedom of expression and I see this as a correction in my view”Oldon said. Mr. Oldon was brought to the regional court of Hargeisa on 20-4-2019 and the judge of the court asked the police and prosecutors several questions “The judge asked police officers and prosecutors the following questions:1. Do you have a transfer letter from Togdheer Court?2. Have you a court warrant to arrest him?They said “No”. After that the judge told them that he cannot legally open the case since you do not have a letter of referral from the Togdheer court as well as you do not have a court warrant of arrest. The judge ordered them to bring me back to the Togdheer court in 7 days and they did not obey the order of the judge and still am in Hargeisa today”. Oldon Said.  “I was brought to court again on 27th April 2019 and remanded for seven days in prison pending a police investigation and again I had been brought to the court on 4th May2019 and then remanded me in prison pending a police and prosecutors further investigation”. He added.Finally, Mr. Oldon confirmed to the Commission that he had two lawyers  and he meets them every time he needs them and his family are  allowed to visit him . Also he stated that prison officers treat him well.

Hence, Somaliland National Human Rights Commission appeal to the police, prosecutors and others which are involved in Oldon’s case to speed up the case investigation and avoid any unnecessary delay or prolonged stay in prison without conviction otherwise it would be defilement against justice trail system of the country as well as the rights of the prisoner.

Members of the Somaliland National Human Rights Commission led by the chairperson Mr. Mohamed Baruud Ali have visited on 01-06-2019 MP. Mohamed Ahmed Dhakool, imprisoned in the Hargeisa Criminal Investigation Center (CID). The MP was arrested and taken from his house on 09-05-2019 around 10:00 PM without court warrant.

The arresting of a member of the parliament had resulted a press release held by MP talking about the celebration on 18th May, the day that Somaliland regained its independence from what so called the Somali republic which were united by two Somali entities (Somaliland British protectorate and Somali Italian colony) got their independences from colonizers, United kingdom and Italy respectively.  The MP indicated that this day is a dark day and the Somaliland people were not agreed unanimously to be a national day to commemorate it but it concerned or was relevant to a special clan.

The MP was detained in Hargeisa CID for 22 days without court trail. The court refused to remand him and stated that his immunity bars prosecution. As well as the standing committee of the House of Representatives described the MP’s arrest as unlawful and  refused to remove his immunity and called to the government to immediately release the MP. The Commissioners of SLNHRC visited to the MP a second time to look at his situation and closely observe that MP gets his constitutional rights as long as the prisoner he is. The commissioners ensured that the health condition of the MPs is very good, and he assures to the commissioners that he meets his doctor when he needs him, and he told them that he has an allergic which sometimes he feels but now he assured that he is in good condition of health.

The MP complained to the commissioners that he is not allowed to communicate with his family and still he had no any information about his family. He also stated that even the bill of his family had in Zaad Account in his mobile and he has no access to send them and he  worries and fears how his family live currently. He also told the commissioners that, frequently asks to the police officers those who are guards for him the identities of visitors and such kind of action is violation and against the constitutional rights of prisoner.Finally the Commission call, the relevant agencies involved the arresting of the MP to urgently allow him to communicate with his family as well as  allow him the visitors those in need to see him particularly his family. These are obligatory rights for the prisoners which are guaranteed by the constitution.