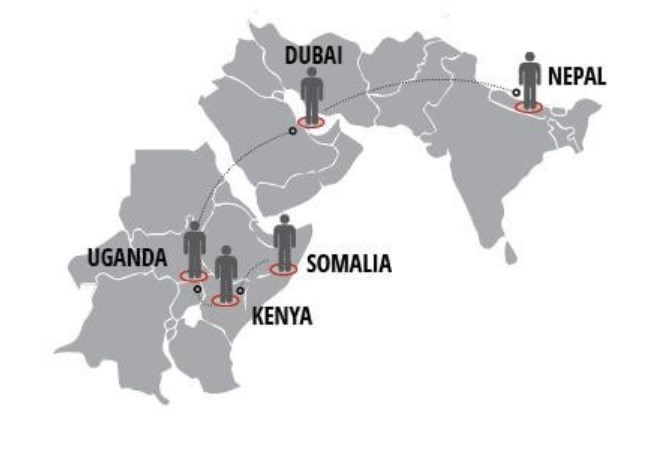 After working in a garage for two years in Uganda, Abdi Khabor had saved up only $7,000, it was not enough to take him to Europe.

He was looking for a way to earn more money, when a Ugandan man offered to smuggle him to Naples via Libya and the Mediterranean for $10,000. Khabor did a Google image search of Naples and saw a prosperous city by the sea and was excited. He paid out $7,000, and his kind employer lent him the rest, saying after seeing him off at Kampala airport: “I know how difficult your life is. Pay me if you can. If not, consider it a help.”

This was the first time Khabor had been on a plane, and he was excited when he got to Dubai. After a short transit, he boarded the next flight, not bothering to check his boarding pass. Five hours later on 17 April 2014, the plane landed at a small airport surrounded by mountains. There was no sea nearby. He asked the person who came to pick him up where he was. “Kathmandu,” came the reply.

Four years later, Khabor is still in Nepal and not Naples. He was taken to a hotel, where he fell asleep. When he woke up the next day at noon, the hotel receptionist told him to pay up or leave.

Nowhere to go, he broke down and wept on the sidewalk in Thamel. The human trafficker’s agent who had come to pick him up at the airport had abandoned him, taking his passport and ticket.

After spending 24 hours hungry in Thamel, he told an African person he met his story. The man gave him Rs200 and the address of United Nations High Commission for Refugees (UNHCR) in Kathmandu. Two months later, he received a refugee ID. Then began his long struggle working as a construction worker or dishwasher to pay for food, clothes, and rent.

Khabor lived with 12 siblings in Somalia’s Suddur village near the border with Ethiopia, farming potatoes and barley and raising livestock. Since his father was paralysed, his mother Anav Haasan took care of the fieldwork as well as the family. But life was not easy, there was never even food and the land owners treated them badly.

One day a gang of men with guns arrived at his home and stole all the grain. His uncle was shot. Khabor’s sister tried to run away, but was raped. Khabor came to Mogadishu with his 17-year-old brother and 15-year-old sister. He started washing dishes at a hotel, leaving early in the morning and coming back late in the night. He found out too late that his sister was pregnant with the child of a high class man who had promised to marry her, but instead threatened to kill him if he spoke about it.

Fighting erupted in Mogadishu, and Khabor could not get away from work. When he got to his room, his brother and sister were missing. He left, travelling through Kenya to Uganda. “I don’t think any of my 13 family members are alive now,” said Khabor one recent evening in Kathmandu. “When I see Nepalis happy with their families, I remember my childhood, the barley bread and soup that my mother used to make. I remember the yard where I used to play. I cry a lot.”

In Kathmandu, Khabor met a few other Somalis like him. Among them was Marian Abdulhi, who had seen her husband and father murdered in front of her eyes, and also fled to Uganda. She also paid $10,000 to traffickers to get to Naples.

Khabor and  Abdulhi are married, and now have a 4-year-old daughter.
“Even mourning and grieving needs time, which we do not have,” says Khabor. “So we cry in the night after the city goes to sleep.”

Abdi Rasid, 27, and his two siblings used to live in Mogadishu. When the fighting started, three armed men entered their home, killed their father inside his shop, and then shot his mother, brother and sister in the yard. Abdi, a witness to this terror, managed to hide and was helped by his father’s friend. Abdi met a trafficker who promised to take him to Australia, but landed up in Kathmandu as well earlier this month.

“A man who came to get me at the airport said this was Australia,” Abdi recalls. “He told me I would be working in a hotel, and took me into one.” The hotel turned him out the next day, and he spent the night in an alley. He also received an UNHCR ID, and eventually married Sudi Abdi Ameena, a fellow Somali who had entered Nepal last year.

The Nepal government has decided to waive the delayed visa fees of Somali refugees, and deport them. They do not want to go back to Somalia where a civil war is still raging. “I saw my parents and siblings murdered before my eyes, how can I take my child there?” asks Abdi, whose one-year-old son needs a kidney transplant.

There are 27 Somali refugees in Nepal, and they do not know where to go next. Says Abdi: “The world has abandoned us.”