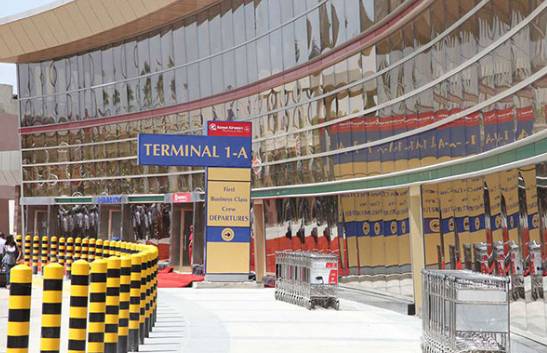 Three Somali officials with diplomatic passports were denied entry at the Jomo Kenyatta International Airport, Nairobi on Monday evening in a tiff that seems to be escalating between Kenya and its neighbour.

A Somali based radio station Dalsan FM, identified the three as Osman Liban (Deputy Minister of Water and Energy) and Senators Ilyas Ali Hassan and Zamzam Dahir.The three landed back in Mogadishu on Tuesday morning after taking off from JKIA where they spent the night, officials said.Liban is said to have travelled to Kenya to attend the launch of the EU Trust Fund for Africa programme to be opened at the United Nations office in Nairobi on Tuesday dubbed “Collaboration in Cross Border Areas of the Horn of Africa”.A program of the event indicate Foreign Affairs Cabinet Secretary Monica Juma is among those expected to address delegates on Tuesday afternoon.Dr Juma was set to address the media on the issue and other matters at her office on Tuesday.One of the Somali ministers, a dual citizen was however allowed into the country after producing a European passport.

Gamal Hassan (Planning Minister), Abdi Said (President Farmaajo’s National advisor) and Fawziya Abikar (Health Minister) were reportedly allowed access as the last two hold European passports and Gamal a Canadian passport.Reports show the Somali ministers and other officials vowed not to attend the event without the deputy ministers.At the airport, the affected officials were asked to go back to Mogadishu and pass through the Kenyan embassy there for visa approval before coming to Nairobi.“They know the rules and they have not changed,” said an official at the airport who asked not to be named.It is believed the maritime dispute between Kenya and Somalia is the cause of the developments. Somalia denies claims that it auctioned controversial oil and gas blocks–located in a contested maritime border in the Indian Ocean.Two weeks ago, Kenya ordered all flights originating Somalia to pass through Wajir for security checks.In February this year, Kenya declared Somalia an enemy state for reportedly auctioning the blocks.President Uhuru Kenyatta chaired a Cabinet meeting to discuss the stalemate.The Cabinet agreed on a roadmap for resolving the maritime border dispute and measures for safeguarding Kenya’s territorial integrity.The resolution was to safeguard Kenya’s marine resources including offshore oil and gas exploration acreage in the Indian Ocean.