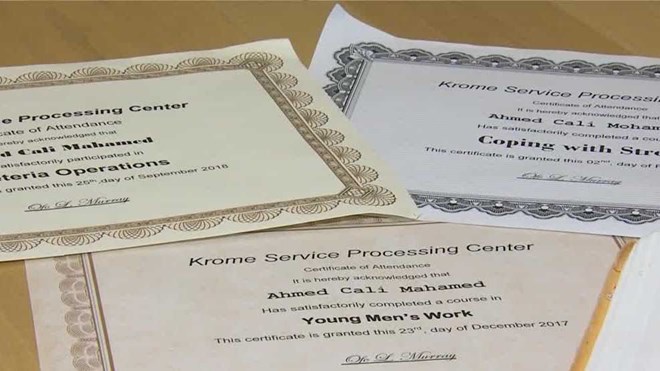 CONCORD, N.H. — A Somali immigrant was freed Monday morning in New Hampshire, more than two years after being detained by immigration officers, after the American Civil Liberties Union filed a lawsuit.

Mahamed Ahmed-Cali was in custody for two years and seven months. During that time, he was transferred to detention facilities in six states, including his most recent placement in New Hampshire.

“I hope many people will understand what’s going on,” said Ahmed-Cali, who fled Somalia after he said a terrorist group threatened his family.

ACLU officials said he tried to lawfully enter a port of entry in San Diego in 2016. But U.S. Immigration and Customs Enforcement officials detained him and didn’t give him a chance to contest his detention in court, according to the ACLU.

“When you’re being held for a significant period of time in the United States, you have a right to contest your detention, to go before a judge and say, ‘I should be released.’ And he was never given that right,” said Gilles Bissonnette, ACLU of New Hampshire legal director.

Ahmed-Cali said he was mistreated by ICE agents during a failed deportation attempt in 2017.

He was released Monday morning from ICE custody, almost a month after the ACLU filed a lawsuit.

Ahmed-Cali told WMUR he’s thankful for the ACLU and attorneys who helped to get him out.

He said he’s still concerned for his safety, though, and did not want to show his face on video.

“This is really one of, I think, the worst examples of abuse that I’ve seen. It’s something that we should never see in the United States because not only is it unconstitutional, it’s immoral,” Bissonnette said.

Ahmed-Cali is now trying to stay in the country through the asylum process. Because this is a pending case, ICE officials said they are not able to respond to the claims made by the ACLU.