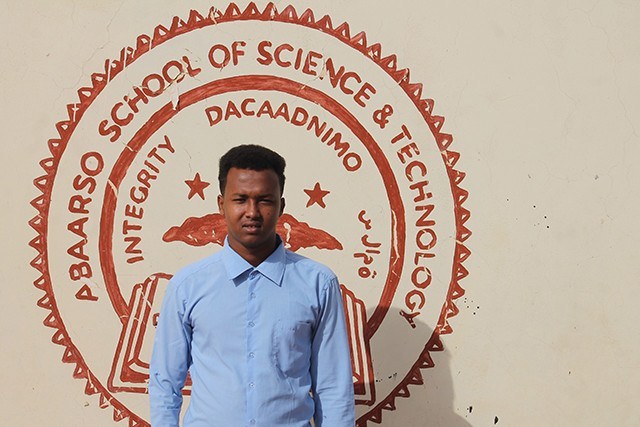 HARGEISA, Somaliland — Growing up in Somaliland, a self-declared state in northwestern Somalia, AbdulQaadir Ahmed had a reason to count himself among the lucky ones: He had an opportunity to attend a primary school and an ambition to attain higher education.

But then one Thursday morning, in 2015, that dream came crumbling down after he was expelled  from school — for not being able to pay the monthly $3 tuition fee, an amount that became unbearable for his parents.

On his way home, AbdulQaadir came across a long line of young boys and girls. When he asked what was going on, they told him that they were in the queue for an admission exam to attend Abaarso School of Science and Technology — an elite American-run grade 7-12 boarding school in Somaliland — which he had never heard of.

“I jumped in the line,” said AbdulQaadir, 16

A few months later, he began his education as a seventh-grade student at the school, where high academic performance and English proficiency is expected from every student. But AbdulQaadir came with only three words of English: pen, pencil and book.

AbdulQaadir’s academic success is hardly unique at Abaarso. It’s a common phenomenon here for most high school students to get accepted to international boarding schools and universities, including those in the United States, South Africa, Hong Kong, Turkey and Costa Rica.

“This year, we have about 35 students who are going abroad,” James Linville, the Abaarso principal, told me in his office. “Some are going to high schools, some to exchange boarding schools and some to colleges. All together, in the school’s history, we had over 160 students study abroad.”

How does this small school, which sits in a dusty desert town 45 minutes outside the Somaliland capital city, Hargeisa, manage to produce such outstanding Somali students, many of whom have earned spots in such Ivy League universities as Harvard, Yale and Stanford?

That’s the question that has brought to Somaliland a group of eight teachers, counselors and emotional support staffers who serve many Somali students with a similar background as Abaarso’s at Wellstone International High School in Minneapolis.

The idea to visit Somaliland came to Badri Mohamoud, a student teacher at Wellstone, this past spring as he worked on a final research project for his master’s program at Augsburg University. Mohamoud wanted to examine the achievement gap between Somali-American students and their white counterparts in Minnesota. (Disclosure: I am traveling with the group to document their experience for a future research project comparing the performance of Somalis in Somalia with those in the diaspora.)

In this research, he found that the achievement gap between these groups has widened over the years. He also found that most of those who talk about solving this problem often focus on the need to provide educators with cultural competence training opportunities.

“All of those proposals are not working, in a sense,” Mohamoud told me in Hargeisa. “We’re spending a lot of money on training but getting nothing out of it.”

The problem, he argued, isn’t because teachers don’t know how to teach; it’s because they have lesser expectations of Somali students. “They think that non-white students cannot perform as well as white students,” he said. “So when a student walks into his or her class, the teacher thinks that that’s just another Abdi and will never be as good as the white students.”

To show that Somali students can, indeed, excel academically when given the needed attention and resources, Mohamoud and his colleague Ali Kofiro, a school counselor at Wellsone, encouraged teachers and other staffers to study the success stories of Abaarso.

The school was founded by an American millionaire named Jonathan Starr “to produce,” as he told “60 Minutes” in 2017, “ethical and effective leaders” for Somaliland and Somalia. A Massachusetts native who ran a hedge fund in Boston, Starr retired, at 32, from this post in 2008 to pursue a more fulfilling career.

By then he had known about Somaliland, a state in northwestern Somalia that has been seeking international recognition over the past three decades to no avail. In 2009, Starr moved to Somaliland, where he established Abaarso boarding school, investing about $500,000 of his own money.

The American-style boarding school is the most admired school in Somaliland. It’s known for its intense academic and extracurricular activities, which start at 7 in the morning and end at 9:30 at night, six days a week.

Though nearly all of the students speak only Somali when they first arrive at Abaarso at seventh grade, nearly every course here is taught in English and the students aren’t allowed to speak a language other than English in classrooms.

Most of the Abaarso teachers are in their 20s and early 30s who come to teach a few years after their undergrad college career and before starting graduate schools — and they’re not usually trained teachers. The majority of these teachers are Americans, but they also come from Australia, Canada and Europe.

Despite the positive impact Abaarso has had on Somaliland, it hasn’t escaped controversy. Speaking to “60 Minutes,” Starr noted that he had “an argument with his Somali partner over who should run the school.” When the partner lost the fight, he spread rumors that Abaarso was created to convert young Somalis to Christianity. Also, when Anderson Cooper covered Abaarso for “60 Minutes,” people circulated on social media that the school promotes homosexuality among the students.

For all that, Abaarso remains the most coveted school in Somaliland and its surrounding regions. This year, for example, 1,800 took the admission’s exam for the 48 seats.

The school is particularly known for sending dozens of students each year for colleges and through high school student exchange programs across the world. Since 2009, the Abaarso administrators have sent more than 160 students to top schools in the U.S., Japan, Turkey, South Africa and Hong Kong.

“By the time they are in 10th, 11th grade, top students are applying to abroad,” said Linville, the principal. “That’s part of the mission of the school. It’s something that we think is important for their education, giving them access to quality education where they wouldn’t be able to find in many other places.”

It was because of this success story that Mohamoud, the Augsburg grad student, came with the idea of bringing his colleagues to Abaarso school — and of showing them that Somali students can achieve excellence when their teachers believe in them.

But that doesn’t mean that there aren’t lessons for the teachers to learn from Abaarso, said Jennifer Leazer, an English teacher at Wellstone, who spoke with teachers and administrators and visited several classrooms during her visit.

“We saw in the classrooms how engaged the students were, how much they rose to high expectations — and those are definitely our key takeaways as teachers, going back to our jobs to Wellstone.”

“It was really difficult,” he told me on recent evening on the Abaarso campus. “But I knew I was going to be fine. I knew of role models who came to Abaarso like I did, and they succeeded. When I saw them, I said, ‘If those students did it, you can do it too.’”

AbdulQaadir hasn’t had to worry about being kicked out of school for not paying tuition fees, either. One month after he took the Abaarso admission exam on that Thursday morning, administrators from the school called his mother about her son’s acceptance to Abaarso.

When she learned about the $1,800-a-year tuition, she told the school that there was no way she could afford that. So Abdul-Qaadir was awarded a scholarship that covers his education and living expenses at Abaarso.

“I got this opportunity because of my hard work,” he said. “But it’s also something I achieved with the help of the people around me. My teachers, my classmates.”