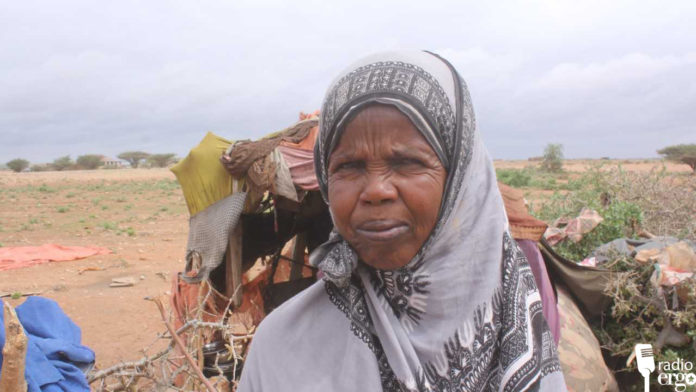 As part of Radio Ergo’s series on life in Somaliland’s IDP camps, our local reporter visited Anjiid Camp near Lasanod, in Somaliland, where former pastoralist women are making a new living collecting myrrh from the mountains in order to raise their families.

At the age of 65, Jamaad Farah Mohamed has rebuilt her life around the sale of myrrh that she collects from the mountainous area near the camp they have settled in at Anjiid, 20 km north of Lasanod, in northern Somalia.

Anjiid camp, spread over a wide area, hosts drought-hit former pastoralists, who dropped out of their traditional livelihood three years ago due to harsh drought and loss of their livestock.

Jamaad gets up early every morning and heads off with a bag to the hillsides to collect the myrrh. She walks for about five kilometres a day, usually gathering half a kilo of the natural gum. She works for about seven hours a day.

She sells the myrrh to local Somali traders, earning 200,000 Somali shillings ($7). It is used in making perfumes, toothpaste and other medicinal and cosmetic products.

Jamaad has been doing this for the last year to earn a living. She carries back firewood as well in order to cook for her children. The work is tough as the short, thorny trees grow in a rugged environment.

“We are forced to earn a living in this environment but it is very dangerous. I carry a knife [to make cuts in the bark to release the resin] and a bag to collect the gum. The trees are thorny and you can get scratches and badly pricked,” she told Radio Ergo.

She is able to buy rice, flour, and sugar for her six children, including her 30-year-old daughter, who has suffered from mental illness for the last three years. Jamaad takes care of her sick daughter and her daughter’s children. Three of Jamaad’s children go to a primary school in the camp.

Around 45 women in this camp are involved in collecting myrrh as a living. But the harvesting has to stop when it rains. Gathering myrrh is dry season work as the rain washes away the resin bleeding from the trees.

“We have not collected any myrrh for the last four days because of the rain, which has washed away the gum. This is a challenge as it is now our important lifeline,” Jamaad said.

Jamaad’s family was among the first 15 families to settle in Anjiid camp in August 2016, when the drought was biting. Her family lost their entire herd of 120 goats in Geed-Hamarey, some 15km from the camp.

The camp now hosts 216 families, who came from Geed-Hamarey, El-quite, and Gosin villages and have dropped out of pastoralism.

Most people live in small huts made of sticks and cloth with a plastic covering, like Jamaad’s.

Some families receive help through remittances from relatives abroad to help them pay for water and education for their children.

Fadumo Mohamed Ali, another mother of eight children, used to own 70 camels and 200 goats, but they all died at the height of the drought. She says she found it tough adapting to life in the camp at first. However, she now has six of her children in a free school in the camp, although she is still faced with the task of providing for them. She is also in the myrrh business.

“The myrrh trees are very beneficial. When the children get a cold or flu, I stir the resin into the water and give it to them. Also, when they get wounds, it acts as an antibiotic and they recover quickly. It is a medicine that the Somali people have used for a long time,” Fadumo told Radio Ergo.

Some women in the camp also collect fodder for livestock from the outskirts of the area and sell to the pastoralist families in Lasanod. Amina Jama Farah, a displaced mother of five, used to have her own herd of 100 goats on the outskirts of Anjiid. But as her own animals all died, she now makes a living selling grass to other livestock owners.

Her two sons, aged seven and nine, help her collect the grass. She earns 100,000 shillings ($4.5) a day and can provide her family with two meals a day. Her husband has no job and does not bring in any income.

The families in Anjiid camp were welcomed by the local drought response committee in Sool region that operated when the drought was at its worst in 2016-17. The committee gave them food and water and transported them to camps with access to wells.

Now, however, they are more or less on their own and have to earn a living as best they can. These displaced families in Anjiid say they have no prospect of returning to their former areas, as they no longer have any livestock.