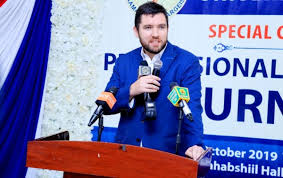 HARGEISA–The UK head of mission to Somaliland has said that he is worried on the worsening of the freedom of speech and the press in Somaliland.

Mr. Stuart Brown has made the remarks while addressing a high level meeting held in Hargeisa on Tuesday, which is aimed at strengthening media freedom in Somaliland.

The meeting which took place at Ambassador Hotel was attended by the police force, the minister of information, Human Rights Commission and Somaliland Journalists Association (SOLJA).

The UK mission to Somaliland has said that he is concerned of the current state of the media freedom in Somaliland as he took for instance cases that happened in 2019.

“There were 31 detentions in 2019. Five were only led to court. Why is this? Somaliland, I am sorry to be negative here, has a bad reputation for freedom of expression. If I talk to other diplomatic colleagues, they talk about human rights. The first thing they say is the situation of journalists is terrible.”

“But at the same time we heard that SL has actually in the region very good ratings on the freedom of expression. What is going on here? What is the breakdown of not understanding and how can we combat that? We had 31 journalists detained, 5 ended in court. So those other 26, the ones there was not a case to break. Why were they picked up in the first place? What is going on? Who is to blame?

Now it is easy to point fingers. And I think we have already heard today that responsibility sits on many different sides. Now we know there is a lack of in appropriate legal framework.” Stuart narrated

Mr. Stuart has hoped that the minister of information is doing a good work to push that forward.

The UK head of a mission to SL also anticipated that all stakeholders would work together to make 2020 a year when Somaliland media law passed through the parliament.

He blamed that part of the problem lies on lack of accountability on media houses in Somaliland.

“But we also know that lack of accountability in media houses is a big issue. In my country in the UK, a media house or a newspaper or a television protects the framework on what journalist can write. That is too sadly lacks often in Somaliland. Finally, those poor journalistic practices. Now I am looking this room here I know I got some of the cream of journalists in Somaliland. On the question practices but we all know that journalism here, there are challenges.” Stuart said