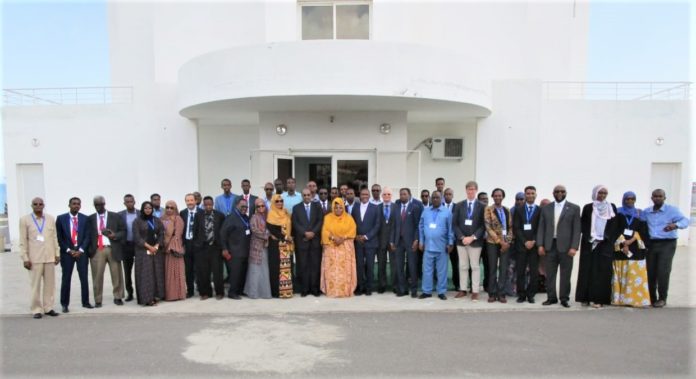 The reestablishment of the Somali maritime sector took a step forward when an induction training for the newly established Somali Maritime Administration (SMA) was conducted in Djibouti at the Djibouti Regional Training Centre from 19-23 January.

The training, delivered by the International Maritime Organization (IMO) in partnership with United Nations Assistant Mission in Somalia (UNSOM) and supported by EUCAP Somalia and other international partners, focused on operationalizing the SMA and equipping it to perform its institutional duties and responsibilities.

The SMA was launched in October 2019 after more than two decades of civil war which destroyed Somalia’s maritime institutions and structures. The SMA is the first pillar in assuring that vessels flying the Somali flag are safe, environmentally sound, and internationally acceptable, and that the safety and security standards of foreign vessels arriving at Somalia Ports are up to standard and those crossing Somalia waters compliant with International Law.

International convention to be ratified in the spring

The participants familiarized themselves with IMO’s instruments such as the two international conventions; Safety of Life at Sea (SOLAS) and Prevention of Pollution from Ships (MARPOL), which Somalia is planning to ratify this year. The functions of Maritime Administration were discussed extensively, and working groups delved into regulations required for operationalization of SMA, forms, and documentations including certifications, operationalization of a Ship Registry and Maritime Resource Coordination Centre (MRCC) A course of action was agreed on to develop the work of the SMA and recommendations drafted on the way forward, including timelines for the next steps. In addition to ratifying IMO conventions (SOLAS and MARPOL), the agreed activities included, for example, a strategic plan to give effect to the mission and vision statements of SMA, training and capacity building of the personnel and ensuring early adoption of the Somali Shipping Code into National Law.

EUCAP Somalia’s Advisor to the SMA, Mr. Andrew Lyttle, explained the roles and relationship between a Maritime Administration and Coast Guard, and how EUCAP continues to build this functional capacity adding that the induction training was a step towards the full operational capacity of the Somali Maritime Administration. He however highlighted that there is still a lot of work to be done and reiterated EUCAP Somalia’s commitment to continue supporting her Somali partners towards further development of the SMA.

The Minister of Ports and Maritime Transport also recognized EUCAP’s work in her opening remarks commending EUCAP’s support towards the operationalisation of the SMA.