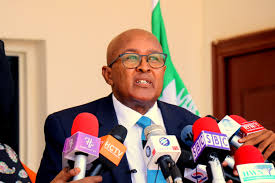 The chairman of SL’s opposition party Wadani announced that they have lifted the suspension of their member to the National Election Commission.

Speaking at his party’s international commemoration of Women’s Day, Abdirahman Iro, said that the party will now nominate a member to the election commission.

Wadani party previously suspended its nominee to electoral commission to protest against the membership alleged partisans in the Commission.

That dispute was eventually resolved last month with a compromise that sees the number of electoral commissioners doubled.

Chairman Irro said that a political agreement is in place and an election will be held before the end of this year.

He called upon the public should be prepared and elect good representatives this year to address the concerns of the public.

The leader of the opposition party urged the office seeks from the party to confirm their candidacy this month.

In addition, Irro endorsed the quota of the parliamentary seats allocated for women.

He reiterated that his party supports all mechanisms aimed at enhancing women’s fair representation in the government.