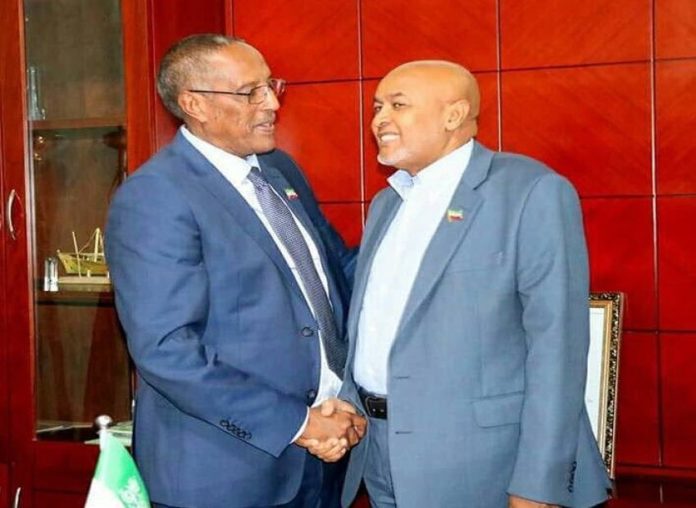 In early May 2019, Somaliland’s ministers for information and transport called for press briefings on separate occasions and each one of them made similar proclamations that Waddani, the main opposition party, is engaged with treasonous activities as they serve the interest of a foreign agent, a shorthand for Somalia.

They also claimed Waddani supporters are not penchant to the Somaliland’s independence declared on 18th May 1991.

The president made a passionate plea to Waddani supporters, asking them to defy their leaders and celebrate Somaliland’s Independence Day and take part of coming parliamentary elections; despite the presence of the leadership of the party in the ceremony.

In that speech he quoted lines of a nationalist lyric, “kuwii ka baydhee, bahdood ka leexday, waa baaba’ooda”, which could be translated: those who don’t toe the line and strayed from their folks; will indeed perish”. In other words, threatening remarks to opposition supporters and a warning of what might come to them, if his appeal is not heeded to.

This is not the first time Mr Biihi made such assertions. I believe the time has come that we listen to president’s statement and believe him. It is every president’s prerogative to warn his people wherever danger lurks.

As Waddani had received nearly half of the popular vote in last presidential elections held in November 2017, we can only conclude from president Biihi’s assertions and pleas that Somaliland population is divided on seceding from Somalia.

President Biihi’s honest assessment of the political situation is that since a unionist party – as he deems Waddani is – scored high in the polls and with growing popularity – he is worried that soon the majority of Somaliland population will openly lend their support to revoking the unilateral declaration of independence; and henceforth going back into the fold of Somali Republic.

These worries sometimes border on paranoia as is shown in the illegal detentions of Dhakool, a member of the parliament, Naima Abwaan Qorane, a young poetess and popular journalist Oldoon. Somaliland government has no tolerance for anyone expressing a minute sympathy for Somali unity. Claims of the existence of unionist supporters and sympathisers in Somaliland is not new; as manifested in most of president’s speeches, during 2017 presidential election campaign, and become a regular theme in most of his exhortations; and hitherto with no abating. It is time to take heed of the president’s calls.

However, that is not the picture, in which Somaliland ministers and officials relay to the rest of the world. They present the unequivocal wide support of the people to the declaration of independence from Somalia.

The question is which one do we believe to? I say the truth lies with the first assertion, that a substantial part of the population doesn’t support the secession; as for the latter it is for the consumption of the international community, mainly foreign governments (regional and international agencies).

Somaliland currently pays fortunes, in regard its meagre resources and paltry finances, to a US lobbying agency, Glover Park, based in Washington, to propagate above stated international public relations point.

The reality is that not all Isaaq clans support the secession and overwhelmingly non-Isaaqs clans – Dhulbahante and Warsengeli in the east and Samaroon in the west – don’t.

Even for those who currently support the secession or independence, depending where you stand, is only a temporary stance. Their calculation is that, there is no fully functioning government in Mogadishu; and hence Hargeisa is a better bet for now.

As soon as a central federal government in Mogadishu finds its feet, unionists’ voices will become louder and louder by the day. President Biihi knows this very well and that Somaliland’s self-declaration of independence is on a “borrowed time”. No wonder his government vehemently objects the federal government of Somalia.

–
Mohamud Ahmed is writer based in London, UK
Email: maxamuudaxmed@live.com