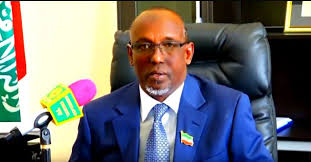 The Somaliland gov has confirmed that a ship carrying 20, 000 goats and sheep that left from Berbera port four days ago is still stranded in Saudi port.

The bone of contention is that the Saudi Arabian authorities have imposed on new regulation which stipulated that all livestock export from Somalia including Somaliland must have a medical license certificate issued by the ministry of livestock of Somalian Federal Gov.

This was disclosed by the minister of livestock of Somaliland, Mr. Hassan Mohamed Ali aka Hassan Gafaadhi in a joint press conference held in Hargeisa flanked by the chair of Somaliland’s chamber of Commerce.

Somaliland gov strongly protested against the Saudi demand that it imposed on livestock export to Saudi Arabia during the Hajj time.

The minister for livestock said previously that Somaliland won’t compromise its statehood on livestock export to Saudi Arabia.

The minister of livestock for Somalian authority is reported to be in Saudi Arabia and is believed to be the one who is behind the new regulation which Saudi imposed on Somali livestock export.

Somaliland is adamant that it won’t allow traders to export livestock with the health certification from Somalia.

Somaliland also asserted clearly that the ministry livestock will issue the medical certification in regard to the livestock. The minister also insisted upon that exported livestock from its ports won’t return.