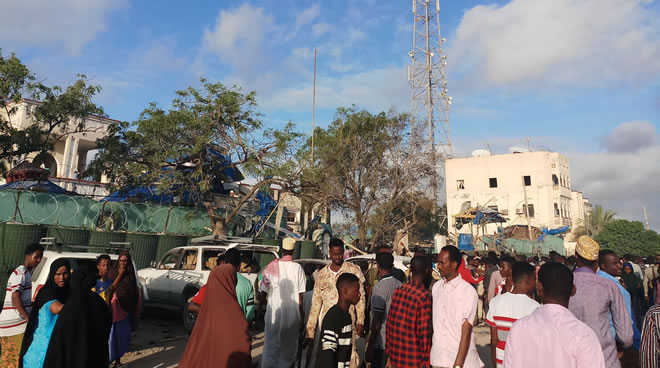 A British person has been killed in a terrorist attack at a hotel in Somalia. A regional official said the British person is among 26 people who were killed when gunmen stormed the hotel in the city of Kismayu.

Terror group Al Shabbab has claimed responsibility for the attack. A suicide bomber rammed a car containing explosives into the Asasey hotel in northern Somalia before gunmen stormed the building. Hussein Muktar, who witnessed the attack, said: ‘The blast was very big. There is chaos inside; I saw several dead bodies carried from the scene, and people are fleeing from the nearby buildings.’ Americans, Kenyans and Tanzanians were also among the dead, officials said, while a presidential candidate for the upcoming regional elections was also killed.

Local TV host Hodan Nalayeh has been named as one of the victims (Picture: Getty)

Witnesses said they heard gunfire inside the hotel soon after the car bomb went off. Regional politicians and clan elders were inside the hotel discussing a forthcoming regional election at the time of the killing. The Somali journalists’ association said two journalists based in Kismayo were killed in the attack. Abdalle Ahmed Mumin, the assocation’s secretary general, said: ‘Mohamed Omar Sahal and Hodan Naleyeh are both among those killed.’ Naleyeh had recently returned from Canada and was understood to have been with her husband, also reported to have died. They were the first journalists to be killed in Somalia this year, the association said.