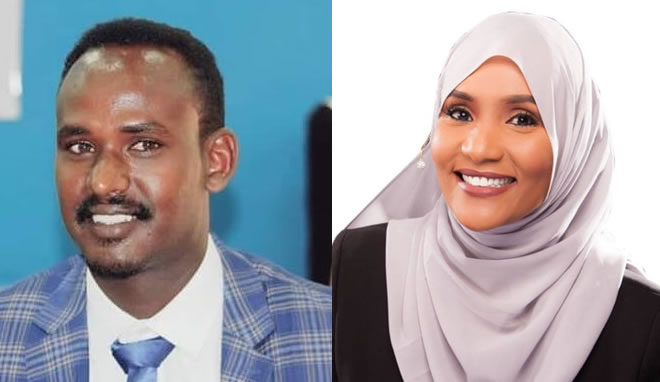 The National Union of Somali Journalists (NUSOJ) deeply mourns the deaths of two journalists following a car bomb that went off in a popular hotel in Somalia’s port city of Kismayo where political figures and traditional elders were meeting.

Islamist group Al-Shabaab said it had carried out this suicide attack. Journalist Mohamed Sahal Omar, known Ga’ma-Dhere, who works for Puntland-based Somali Broadcasting Corporation (SBC) was killed by Al-Shabaab fighters who stormed the hotel after the car bomb blast at Asasey Hotel. Female journalist, Hodan Nalayeh, founder of Integration TV, was also gravely wounded in this attack and died in the hospital. Omar was shot in the head as he trying to take pictures of the Al-Shabaab fighters, according to 2 people who were rescued from the attack.

“We mourn the senseless deaths of our two colleagues, Mohamed Sahal and Hodan Nalayeh, who were both murdered in a cowardly and senseless terrorist attack. NUSOJ extends its deepest condolences to the families of Mohamed and Hodan, and to our professional colleagues in Kismayo for this terrible tragedy,” said Omar Faruk Osman, NUSOJ Secretary General.

The death of two respected journalists is a serious loss for journalism in Somalia and shows how danger often lurks for conscientious professionals in the most unexpected places. Hodan Nalayeh recently returned from Canada and has been running popular TV program on social issues. Hodan’s husband was also killed in the attack.

“The death of Hodan and Mohamed speaks of the continuing hazards that journalists face in Somalia” added Osman. “They were deeply committed to independent journalism and the principles of a free media”.

Hodan Nalayeh, 43, and Mohamed Sahal Omar, 35, are the first two journalists who were killed in Somalia in this year.