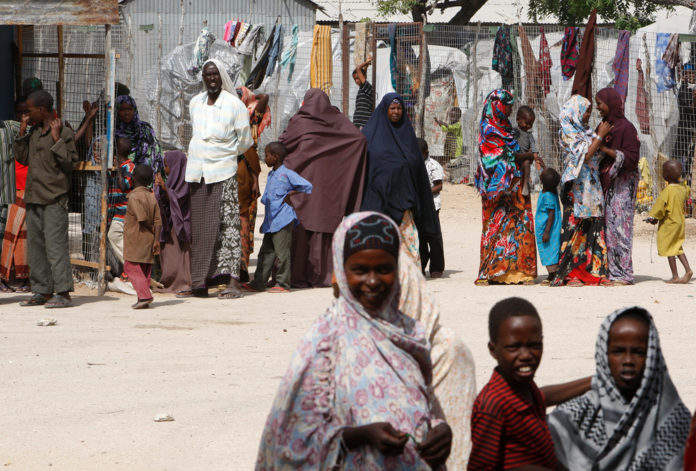 The challenge is to ‘improve [the system’s] accountability and transparency’.

For the past eight months, home to Dahabo Abdullahi has been a hut made of sticks and plastic sheeting in a “privatised” camp in the Somali capital. Like many of the more than half a million displaced people living in and around Mogadishu, she pays a “gatekeeper” part of her food ration every month as an entry fee and for the provision of basic services.

A single mother with eight children, Abdullahi fled fighting between al-Shabab jihadists and Somali government forces near her village of Basra in the Lower Shabelle region, about 30 kilometres north of the capital, in November last year.

When she arrived in Mogadishu, a former Basra neighbour told her about the makeshift settlement of Sabriye, in the city’s northern Daynille district.

She was allocated a space by the manager of the informal settlement – known as a “gatekeeper” – on the condition that once she registered with the UN’s World Food Programme she would part with a percentage of her ration.

“They took half of everything I was given.”

“They took half of everything I was given,” she told The New Humanitarian. “That is what every person in this IDP camp is giving. Though I need all the food, I can’t refuse to give the gatekeeper otherwise they will evict me from the camp.”

Gatekeepers are generally vilified as criminals by the Somali authorities – effectively an informal power structure beyond the government’s control. The international aid system has tried to close its eyes to their presence, an aid worker, who asked not to be named, told TNH.

But in a country with no formal camps and professional camp managers, they link the more than 480 settlements in Mogadishu to the aid system, ensuring the IDPs receive their rations – from which the gatekeepers take a cut.

Given the system is so entrenched, the challenge is to “improve its accountability and transparency”, said Erik Bryld, chief consultant of Tana Copehnagen, a consultancy that has provided training on camp management to gatekeepers under a UK Aid-funded project.

There are more than 518,000 IDPs in Mogadishu, displaced from the countryside by drought and conflict. Gatekeepers have developed a business around accommodating them, providing protection and basic services – including dispute settlement, help in emergencies like illness or births, and facilitating crowd-funding for small camp upgrades.

They fill a vacuum left by a weak government incapable of meeting those needs, and a humanitarian community limited in its operations by Mogadishu’s prevailing insecurity, where UN staff can only be in IDP settlements for a maximum of 30 minutes, according to Justin Brady, head of the UN’s emergency aid coordination body, OCHA, in Somalia.

The gatekeeper system is complex. At its worst – exemplified by a Human Rights Watch report, Hostages of the Gatekeepers – it is violent, exploitative, and dehumanising, with IDPs viewed as commodities that can be literally traded between gatekeepers and land owners. Their freedom of movement and access by NGOs is controlled, often in concert with local militia. This power the gatekeepers can exert means they are often referred to as mukulaal madow (“black cats”) – something to be feared in Somali mythology.

Abdullahi knows not to cross her gatekeeper. A former neighbour in the camp, Ibrahim Ali Isaq, was forced out of Sabriye in May at gunpoint – along with his six children – after he failed to hand over the agreed ration fee, Abdullahi said. When colleagues tried to intervene, they were also threatened with eviction. Isaq was then warned he would be killed should he ever return.

Gatekeepers are a diverse group “ranging from community leaders, to businessmen, to militias, to landlords/owners – some are from the IDP communities while others are not”, notes a briefing by the UN’s Camp Coordination and Camp Management cluster. “The relationship to and with the IDP community is similarly diverse.”

Halima Mohamed Yusuf lives in Weydow camp in Afgooye, 30 kilometres from Mogadishu, along with 3,000 other families. She gets cash assistance from WFP for her six-child household through a voucher system, and says one fifth of what she receives goes to the gatekeeper. “When I take my card to the bank in town to get paid, the gatekeeper follows me and waits for me nearby and deducts $20 from the $100 cash I receive,” Yusuf said.

She doesn’t see it as exploitation, more as a pragmatic and necessary relationship. “It is a normal thing. It is like give and take,” she explained. “[The gatekeepers ensure IDPs are registered] and bring the aid to us, and we have to pay some of our food as a kickback.”

There are believed to be some 130 to 140 gatekeepers in Mogadishu – many of them women – managing single or multiple settlements, usually taking a cut of between 10 to 30 percent of the aid IDPs receive, according to research by Tana.

“Donors and international NGOs do not have direct contact with the IDPs, so it’s the gatekeepers who are dealing with NGOs. Sometimes the assessment of the needs is also made by the gatekeepers. We want this to stop.”

Nuro Mustaf, deputy director of IDP protection at the National Commission for Refugees and IDPs, insists the gatekeepers are little more than a criminal syndicate.

“Humanitarian aid is not reaching its intended beneficiaries. There are cases of whole trucks of aid sold into the market,” she said. “Donors and international NGOs do not have direct contact with the IDPs, so it’s the gatekeepers who are dealing with NGOs. Sometimes the assessment of the needs is also made by the gatekeepers. We want this to stop.”

But several aid workers in Mogadishu, again speaking on condition of anonymity, told TNH that a more nuanced view is increasingly emerging.

According to a December 2017 report by the Overseas Development Institute, “informal settlement managers”, as the gatekeepers are officially known, are a resilient, bottom-up response to the absence of government after three decades of civil war. They regard themselves as deal-makers – their influence based on the ability to deliver services to the IDPs, says the ODI report.

While some gatekeepers can be criminal or abusive, at the other end of the spectrum are IDPs themselves, elected as leaders by other camp residents – people who “care deeply about the well-being of the inhabitants of their settlement”, research by Tana found.

Rather than being arbitrary and unregulated, a separate study of eight settlements by Tana noted they were actively managed and built on “broadly shared values and norms”. This included an initial registration process, involving questions aimed at sniffing out potential jihadist insurgents, and regular information-sharing meetings where problems are publicly discussed.

There is generally a difference in levels of accountability and transparency between old and new settlements, according to Bryld. “In the older camps there is a level of reciprocity between IDPs and gatekeepers. In the newer camps IDPs are more vulnerable and thus more prone to being exploited.”

Tana has been working with the Benadir Regional Administration (BRA), under which Mogadishu falls, to develop a new IDP policy and guidelines. Essentially, it involves creating procedures for vetting and registering gatekeepers, and then setting up an IDP settlement monitoring mechanism.

Hoden Ali of the BRA believes the way forward is for the local authorities to fully bring “settlement management under the authority of BRA”, she said. “This will also improve coordination between the aid agencies and the beneficiary community who are the displaced families themselves.”

But this will be difficult to achieve. The reality is the limited reach of an under-financed BRA and the complex power structure in Mogadishu where gatekeepers – linked to clans, militia, and landowners – are part of a system of influence.

“The gatekeepers provide a service; they give IDPs a place to stay and sort of look after them – if not in a wholly principled way.”

“The BRA is right to take on this task and implement their strong policy on IDPs. But it will take time, resources and legislative improvements to make that happen,” said Bryld. “In the meantime, we need to ensure gatekeeper accountability and transparency.”

Brady, of OCHA, believes the system is here to stay but needs reform.

“The gatekeepers provide a service; they give IDPs a place to stay and sort of look after them – if not in a wholly principled way,” he said. “My opinion is that they are a reality and we need to work with them.” While many in government and the humanitarian community see them “as parasites and criminals who belong in jail, my question is, who replaces them? The challenge is to weed out the bad ones and co-opt the good ones into the [aid] system.”