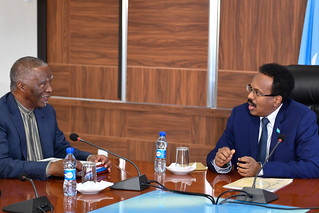 The visit on Saturday, 20 July, follows a mandate given to the panel by the African Union to ensure that the countries of the Horn of Africa deal with matters of peace and security and economic integration in a holistic manner, in order to enjoy the benefits that come with regional integration.

In his audience with President Farmajo and senior officials of the Federal Government of Somalia (FGS), former President Mbeki said that it was important that in discussing regional integration, the first and principal contact be the countries of the Horn of Africa themselves.

“One of the matters which the continent needed to look at was the issue of addressing, in a holistic way, the challenges facing the Horn of Africa. A decision (of the AU) said that it would help the Horn of Africa region, but also have a positive impact on the continent as a whole, if the Horn of Africa moved towards integration,” Mr. Mbeki stated in his remarks in the meeting held at Villa Somalia, which was attended by top African Union Mission in Somalia (AMISOM) and United Nations officials who included the Special Representative of the AU Commission Chairperson to Somalia (SRCC), Ambassador Francisco Madeira and the new UN Secretary-General’s Special Representative for Somalia (SRSG), James Swan.

“That is essentially why we are here, to listen to what the Government of Somalia might say about the integration of the Horn of Africa and in that context, addressing all the other elements that need to be addressed,” Mr. Mbeki added.

The planned integration of the Horn of Africa countries, Mr. Mbeki said, would be hinged on three pillars, which, among other things, would culminate in the countries of the region developing a common security architecture.

“We need to focus on three matters; first, what needs to be done to ensure that the Horn of Africa region develops a common security architecture. The other one would be about economic integration and what needs to be done with regard to that particular matter and the third would be relating to the political matters that are relevant to this issue of regional cooperation and integration,” Mr. Mbeki explained.

The visit by the panel to Somalia is part of a tour of countries in the region, seeking their views on the issue of integration and other matters, making Somalia the second country in the region to be visited by the panel after Kenya.