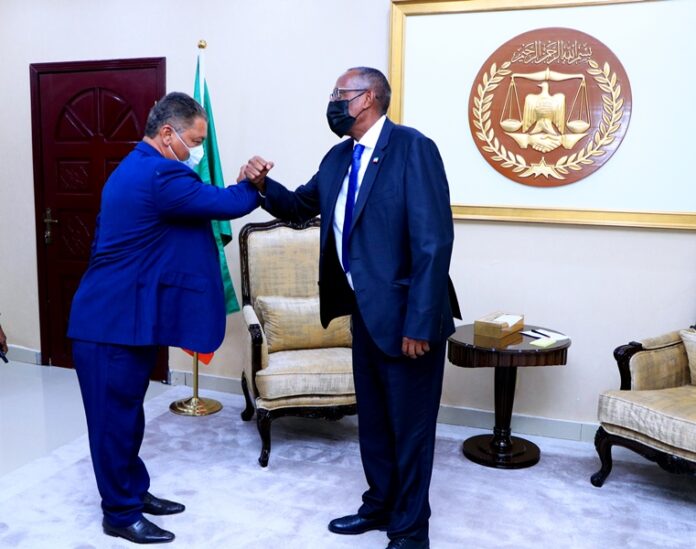 The President of Somaliland Muse Bihi Abdi, accompanied by senior government officials, received a delegation led by Zambia’s Minister of Justice, Mr. Gavin Lubinda, at the Presidential Palace in Hargeisa, to deliberate on bilateral agenda amongst other issues. A statement from the presidential palace, which was received by CBA news office, said the president briefed the delegation on the general history of Somaliland, reminding the delegation that Somaliland is a separate country which gained its independence from the British. The Protectorate joined Somalia and gained independence from Italy at that time, it added. According to the statement, President Muse Bihi Abdi convinced the delegation that Somaliland had regained its independence from Somalia, becoming an independent nation that is yet to be recognized by the rest of the world for the last thirty years.
During the meeting, they discussed issues such as strengthening relations between the two countries, the Republic of Somaliland and Zambia, and the history of the two countries since the colonial era, which has resulted in the people of Somaliland living and still thriving in that country. Former Zambian President Kenneth Kaunda has twice visited Somaliland and enjoyed good relations with the Republic of Somaliland, said the statement. The meeting also discussed the new relationship between Somaliland and Zambia, based on close trade and co-operation between the two countries.
During the meeting, the two Presidents of the Republic of Somaliland, HE Muse Bihi Abdi, and the President of Zambia, HE Edgar Chagwa Lungu, spoke extensively on bilateral relations and mutual interests. At the end of the meeting, the two leaders concluded their understanding and working together to speed up the process.