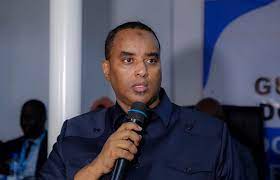 In what appeared to be a stinging attack, Yasin said the woman had applied for a job at the Prime Minister’s office where she was picked up by the current spy boss Mahad Salad and deputy Information Minister Abdirahman Al Adala, who later handed her over to the Al-Qaeda-linked militant group Al-Shabaab.

He added that before she fell into Al-Shabaab’s hands, she had been held in a house in the wealthy suburban village of Darusalam in Mogadishu. She was killed near Al-Shabaab stronghold of Jilib in the Middle Juba region, according to his remarks.

Al-Shabaab, which often proudly claims responsibility for assassinations of government officials and security personnel, dismissed NISA claims that it had murdered the female spy last year.

“The Prime Minister was aware of the killing, Al-Adala [deputy Information Minister] was a facilitator, Mahad Salad [current spy chief] was the mastermind and Al-Shabaab executed her,” former NISA director Fahad Yasin said.

To back up his claims, Yasin said the Prime Minister stonewalled his attempts to provide an explanation about the officer’s disappearance before the then National Security Council, adding that he was fired, arrested in Djibouti, stopped from arriving in Mogadishu and the Premier refused to show up for the NSC meeting.

Asked about the motive behind Ikran’s murder, he asserted that Roble and other unmentioned foreign countries had the intention of discrediting NISA and of plunging the country into crisis.

Speaking about his alleged arrest at an airport in Djibouti last year, he said Somali Premier had coordinated with hostile foreign countries a plot to “disappear” him and he was lucky enough to have been saved by a statement issued by Villa Somalia that warned Djibouti it would be held responsible for any threats to “my safety”.

He also alleged that Mohamed Hussein Roble had orchestrated and financed the abduction of a prominent pro-Farmajo professor Abdiwahab Abdisamad in Kenya’s capital Nairobi last year and that it had been planned to kill the well-known intellectual due to his defense of Somali statehood.

Mr Yasin has not given any evidence for his allegations and Somaliguardian has not been able to verify his assertion.

Hours after his interview went viral on social media, Ikran Tahlil’s mother Qali Mohamed sternly criticized his claims, which it described as a smoke screen. She dismissed his allegations that the PM, current spy chief and Al-Shabaab were behind the disappearance of her daughter, asserting that Ikran is “missing in the hands” of Fahad Yasin and his close associates.