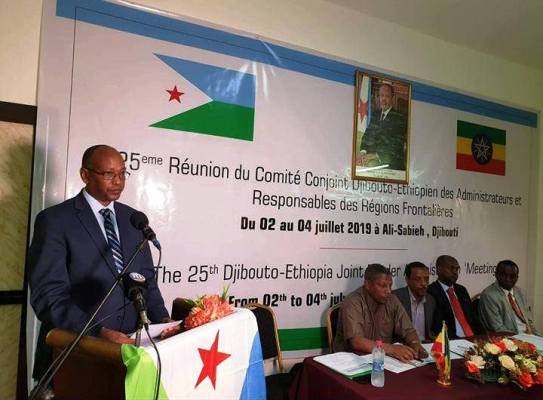 In his opening remark, Yibeltal Aemero, Director General for Neighboring Countries and IGAD at the Ministry of Foreign Affairs of Ethiopia, said Ethiopia and Djibouti have strong historical ties and are united by common languages, culture and social values.

Yibeltal also called for strengthened cross-border cooperation to prevent human trafficking and illegal trade as well as to ensure the benefit of people of the two nations.

General Secretary of the Ministry of Interior of Djibouti, Siraj Omar Abdoulkader, said “we will work together to further advance the existing good relations between the two countries through strengthening infrastructure-driven economic integration.

Ambassador of Ethiopia to Djibouti, Abdulaziz Mohammed for his part remarked that the two countries are working on fundamental issues more than ever before in order to further elevate their ties to a new height.

Ambassador Abdulaziz added that the Ethio-Djibouti railway and road link between the two nations are contributing a lot in promoting regional economic integration.

Issues to be discussed in the three-day meeting are border security, trade, migration, customs and other related topics.