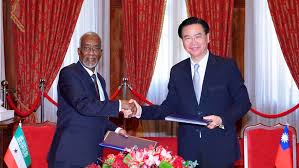 The White House National Security Council tweeted “Great to see Taiwan stepping up its engagement in East Africa in a time of such tremendous need.” The tweet went on to say “Taiwan is a great partner in health, education, technical assistance, and more!”

Somaliland is a self-declared state in the Horn of Africa region. Its 1991 declaration of independence from Somalia is not internationally recognized. However, it maintains informal diplomatic contacts with a range of countries through a network of representative offices.

Both Taiwan and Somaliland have already appointed envoys. However, Taiwan said plans to establish an office in Somaliland are currently on hold until the COVID-19 pandemic subsides and flights resume.