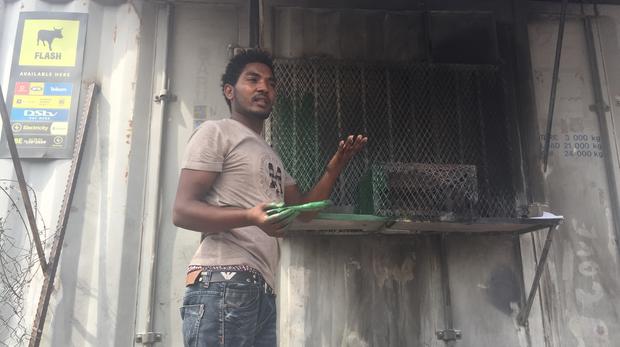 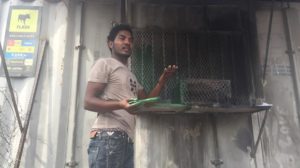 DURBAN – AN Ethiopian trader who had his shop set alight this week, said it was his third shop in under a year to be attacked.
John Ashtal, a foreign trader based at the KwaDabeka township, near Pinetown, said he would not give up as he had to feed his family.
Four armed fired men had gunshots into the air and warned off neighbours from coming outside when they attacked him at his shop while he was inside sleeping.
They robbed Ashtal of R4000 in cash, airtime and cigarettes. The armed men broke in, allegedly with an axe, sprayed the shop with paraffin before setting it alight and fleeing.
“This is the third store that has been burnt in this area. I have stopped going to the police station each time it happens, because it is futile, it is a waste of my time when I could use that time to pick up the pieces as I am doing now,” he said.
When the Sunday Tribune visited the area on Friday, Ashtal was repainting the charred container shop and was angry, revealing that he did not bother reporting incidents to the police anymore because they never helped. He said it was the third store in a year to be attacked.
Ashtal said his suffering came with the territory as a foreigner.
The attacks in Durban come after scores of shops in Soweto were looted by locals this week, allegedly over complaints that foreign  traders were selling fake and expired products. More than 4 people were killed in Soweto lootings this week.
However, Ashtal said he did not sell fake products to his clients. He said he had to get up and start working again to feed his family.
“I have a daughter and she is South African, I cannot leave my child, because who will take care of her and her mother if I leave?”
https://www.iol.co.za/sunday-tribune/news/video-ethiopian-shop-owners-stall-set-alight-in-durban-16831169