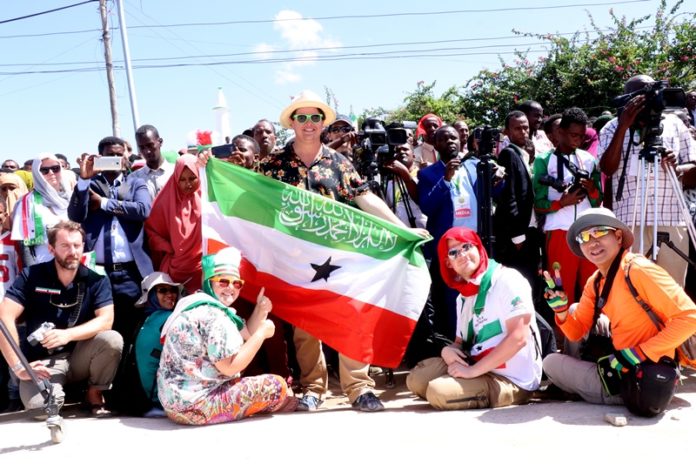 On a bright sunny Saturday on May 18, Somaliland people celebrated the 28th anniversary of our independence, with parades across the country and saluting those heroes who scarified their own blood for our freedom.

This anniversary came at a time when ungrateful, enthusiastic Jaalle Siad Barre apologists in Somaliland legislature and political panhandlers are questioning why are we celebrating on May 18, and a well orchestrated clan based and politically motivated opposition, who have their sight to bring down the Bihi administration at any cost.

But I want to explain what it is, really, and why we celebrate May 18.

May 18 is our independence day. It is also marks the rebirth of our independence after the first generation of our political leaders gave away our sovereignty for the idea of uniting all Somali people into one nation in the Horn of Africa in June 1960. May 18 is the day we celebrate the defeat of one of the most brutal dictators in Africa—the lateSiad Barre, who passed away in Lagos in 1996. Jaalle Siad was a vile dictator who with the help of some military officers overthrew a democratically elected government of Somalia in October 1969.

Siad Barre misruled Somalia from 1969-1991. He kept power through pervasive security state apparatuses, brute military force, state run propaganda, and using government resources to reward clans that supported his regime with aid and administrative regions, and punished those clans who he perceived working against his dictatorship. He created man-made disasters, including sprawling refugee camps across Somalia, to receive foreign money to bankroll his corrupt and brutal regime.

Since most Somali people were not able to organize themselves inside the country, the only option to fight for their freedom was to organize outside the country. Different rebel groups based along clan lines or regions were formed to overthrow the dictator.

But the military regime responded heavy handedly: Siad Barre used scorch earth policy to neutralize the Somali National Movement (SNM), a north Somalia based rebel group. In fact, in 1988-1989, the Isaaq clan, who supported the SNM struggle, suffered a “savage war” when barbaric attacks of the Siad Barre forces, in an effort to quell an uprising, slaughtered more than 50,000 people including women and children, who were fleeing for their lives, and forced hundreds of thousands fleeing to appalling refugee camps in Ethiopia, to escape death and destruction, which amounts to genocide.

Despite the atrocities committed by Siad Barre regime, only two individuals faced a civil suit in U.S. courts for those war crimes. A trial against Col. Yusuf Abdi Ali aka Col. Tukeh, who was a military commander in north Somalia during the civil war, for his alleged war crimes began last week in a Virginia courthouse.

The root causes of why Somali people are still divided can be traced back to Barre’s dictatorship.

After the overthrow of Siad Barre’s dictatorship in Jan 1991, to move on, the Somaliland people chose the path of reconciliation and inclusiveness over vengeance and retribution, but some sub-clans who were supporting Siad Barre during our liberation fight thought of  that goodwill gesture as weakness. Under difficult conditions, Somaliland political leaders set up a basic government structure, an ill equipped police force and a court system, with little or no outside support. In early 1990’s, even after a short period of strife, Somaliland independence prevailed and became stronger.

On Independence Day we celebrate the day we decided the fate of our political future: In May 2001, the Somaliland people overwhelmingly voted for independence through a referendum.

May 18, is also our reflection day: The day we evaluate our accomplishments and the tremendous challenges that our young nation is facing, and to plan for the future—- to make it  prosperous for every Somalilander. It is also the day to celebrate our unity, and reinvigorate our common purpose.

On May 18, we thank the heroes who fought for our independence and remember their sacrifices. We also remember the victims, whose lives were cut short by the evil atrocities of a barbaric regime, survivors and their families.

Mr. Faisal Ali, the leader of the Justice and Welfare party, was unscripted and unapologetic in his speech on May 18 anniversary. I give kudos to Faisal Ali for calling out Jaalle Siad Barre apologists inside Somaliland.

He was unapologetic about the decision for Somaliland to become an independent state. But he called for national dialogue on the future direction of the country. He also warned about certain politicians for their divisive rhetoric, which are sowing the seeds of grievances. Finally, he concluded that Somaliland, albeit imperfect, “is one of the most free countries in Africa.” Indeed, the Freedom House, a Washington DC based organization that monitors freedom worldwide, concurs with his assessment.

But that freedom some politicians, for their own self interests, are exploiting, to undermine the cohesiveness of the nation. And, Mr. Faisal Ali reiterated to the people to defend their freedom, and to unite in order for the next generation to inherit a free and democratic Somaliland.

As former US president, Ronald Reagan said, “Freedom is never more than one generation away from extinction. We didn’t pass it to our children in the bloodstream. It must be fought for, protected, and handed on for them to do the same.”