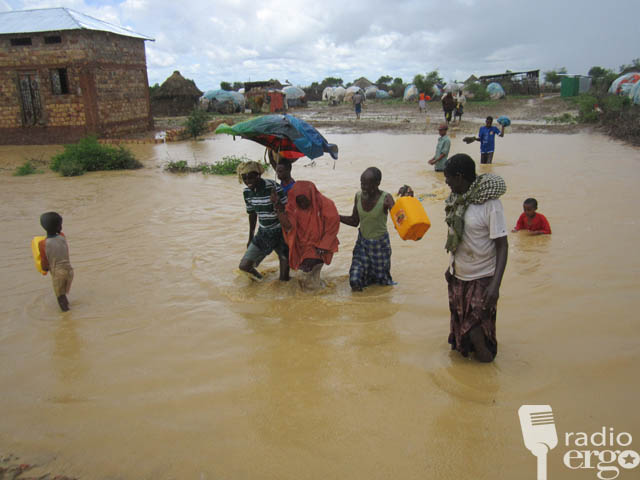 Having waited long for the rains to come, Anab Ibrahim Yusuf was devastated to discover that 18 of her precious goats had died in this week’s heavy rainfall and suddenly colder temperatures in their village of Udaweyne.

Anab told Radio Ergo she went to check on her herd where they were grazing in a small valley and found the animals dead.

A total of 93 goats died in Udaweyne this week, according to residents of this village in the northern region ofToghdeer, around 70km from Burao, which has seen some of the worst effects of the prolonged drought over previous months and years.

“My goats were already weak and thin because of the long drought and now suddenly we have heavy rainfall and strong winds. The goats are suffering from the cold and there’s little grass for fodder. We are now forced to keep the goats inside our houses to protect them from further harm,” said Anab, thinking of her last remaining 24 goats.

Villagers in Magalo-yar, situated between two valleys, were forced to move following flash flooding. Jama Hashi, 68, lost 23 goats in the heavy rain.  He moved with his family to a nearby village.

He was upset that having nurtured 40 goats through the long water shortage and lack of pasture they died when the rains came.

Jama said that the residents were not expecting such strong rainfall and they had no protection for the livestock against flooding.

“It rained heavily yesterday and I am one of the people who lost their livestock in the floods,” said Hashi.  “We had not experienced such heavy rains for the last 30 years here.”

Ibado Muse lost 15 goats leaving just10in her diminished herd.  Before the drought in 2016-17, her family had 75 goats that provided milk and income for them. Heavy rain led to flooding that swept away their home as her seven children fled to the nearby village with a few household items they could rescue.

“I lost my goats to the floods which happened when the goats were grazing. Luckily, somewere rescued by the villagers while they were trying to save what they could,” said Ibado.

Nevertheless, despite the recent losses, most people in Burao have been celebrating the arrival of rain after a grueling dry period and hope that life will improve.