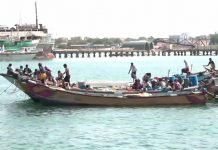 Twenty-two boats from Yemen were also nabbed in the operation conducted by the Marine Forces in Somaliland.
The robust SL coast guards nabbed whilst engaged in illegal fishing in the east coast line of Berbera particularly in Eel Daraad area.
The coast guard’s operation was quite successful and was aimed at beefing maritime security in Somaliland’s territorial waters.
The operation was deemed to ensure the combat against human trafficking and maritime crimes.
Somaliland’s Coast Guard Chief Admiral Mohamed Farah promised to take the arrested boats and fishermen to the court of law.
Somaliland built robust coast guards that are equipped with ships and speedboats.
Somaliland has done a great job by eliminating maritime crimes and threats from piracy in its territorial waters.