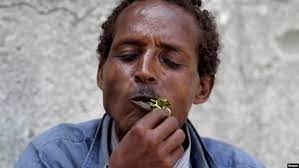 Kenya will begin exporting narcotic khat to Somalia within two weeks after a two-year ban imposed by the government of former President Mohamed Abdullahi Farmajo, Kenyan Minister of Agriculture Peter Munya said on Friday following talks between Mogadishu and Nairobi.

Mr Munya said the ban on the import of Kenyan miraa drastically affected the country’s economy and sharply reduced earnings by producers of the narcotic drug, blaming the decision to suspend khat carrying flights from Kenya on former Somali leader Mohamed Abdullahi Farmajo.

In exchange for the move, Kenya will import seafood products from Somalia and a bilateral air service agreement will be signed at the sidelines of IGAD meeting set to be held on Tuesday that would see relaxed visa rules.

The move is likely to anger Ethiopia which has been a beneficiary of Somalia’s khat imports over the last two years and could also further ignite tensions between Addis Ababa and Nairobi, as both countries compete for influence in Somali politics.

At the inauguration of new Somali president on Thursday, Kenyan leader Uhuru Kenyatta and Ethiopian Prime Minister Abiy Ahmed exchanged hand shake snubs, exposing a diplomatic tiff between the countries over who should benefit most from the new Somali administration.