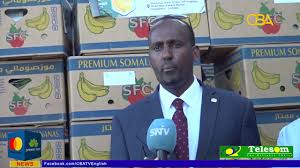 Today, Somalia has sent 14 tons of bananas to Turkey.

This is the second consignment export by the Somali gov’t in over three decades.
A project between Somali gov’t and Geel project ensured the resumption of export quality bananas as a revival of the industry in the Horn of Africa country.
Daha Abdul, the state minister for trade and industrialization, has told reporters that the quality of bananas have been tested and proven to be fit for int’l markets.
” I am honored to oversee the exportation of these bananas since the collapse of the central gov’t in Somalia in 1991. All of our produce was for domestic consumption. I would like to congratulate on the Somali farmers for their tireless efforts.” said the minister
In a press briefing attended by representatives of Somali Chamber of Commerce and Geel project on the occasion of the second shipment in one month of the bananas export in Mogadishu port.
Mr. Nur Yusuf, the director general of the ministry of agriculture, urged the Somali farmers to double the local production in order to be able to sell world markets.
” As the state minister for trade remarked, Somalia is now interested exporter. I would like to encourage the local farmers to increase the farming capability.” said the DG.
The USAID funded project via Geel is intended to promote inclusive economic growth in Somalia whereby Somali business people are given the chance to showcase their products at int’l markets.
Somalia was number one exporter of bananas in the Africa but decades of civil war put it to halt.