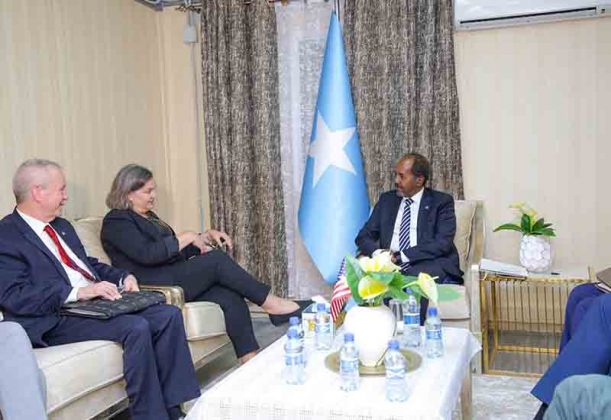 Somalia’s President Hassan Sheikh Mohamud on Monday met US Under Secretary of State for Political Affairs Victoria Nulland at American embassy in the heavily fortified Halane base in Mogadishu to discuss “issues of mutual interest”, his office said.

Nulland arrived in Mogadishu in her first visit following Mohamud’s election last month, which has drawn additional US attention to the Horn of Africa nation, which has long been plagued by political strife and civil war.

The US diplomat and Somali president “discussed issues of mutual interest between the two countries”, Mohamud’s office said, adding that American government “continues to be a reliable partner as Somalia strengthens its state institutions to achieve political, security & economic stability”.

Accompanied by US ambassador and other officials, Nulland held meeting with Somali drought envoy Abdirahman Abdishakur to discuss drought relief efforts and food safety of those affected by food and water shortages in the Horn of Africa nation.