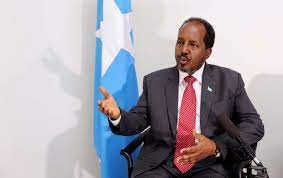 The United States on Monday reaffirmed its support for Somalia’s counterterrorism efforts and promised to back security, reconciliation, and reform agenda of the new President Hassan Sheikh Mohamed following a visit by top American diplomat to Mogadishu.

“During her June 13 visit to Mogadishu, Somalia, Under Secretary for Political Affairs Victoria Nuland met with President Hassan Sheikh Mohamud to offer U.S. Support for his security, reconciliation, and reform agenda,” US Department of State said in a statement.

On Monday, Nuland met with Somali President Hassan Sheikh Mohamud at US embassy in the heavily-fortified Halane base in Mogadishu to discuss “issues of mutual interest”.

Amid devastating drought and food insecurity conditions in Somalia, the US Under Secretary of State “held a round table with Special Envoy for Drought Response Abdirahman Abdishakur Warsame” and UN agencies in Somalia.