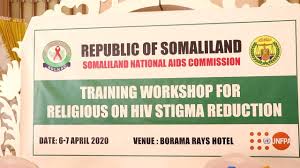 The Director of Public Awareness of Somaliland National AIDS Commission, Muhyadin Yusuf Ibrahim, has formally opened the workshop by addressing the religious leaders that people living with HIV in all major townships in Somaliland come under attack by the public. He stressed that the religious imams could be vital in the fight against the reduction of the stigmatization targeting people living with AIDS. He encouraged the attendees to play a lions share in educating the public to stop the persistent physical and mental harm targeting with HIV positive community. He reiterated that Imams at mosques who conduct awareness raising on daily day prayers could be vital educating the public that this stigmatization against people living with AIDS must stop once and for all. He informed the Imams while being in charge of engagement ceremonies that they have address the two couples who are about to engage to test their blood samples for AIDS. Mr. Muhyadin has stressed that once we do so that a family is being saved which in turn means saving the community. He also narrated that if we do so that we shall have a healthy family.

Lastly, the coordinator for the religious and endowment ministry for Awdal region, Sheikh Hamud Latif Ahmed has also said that the objective of the gathering is to ponder and come up with the best way possible that these people can be assisted as this time around.