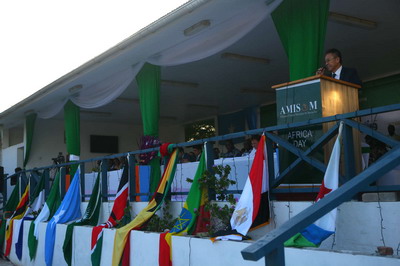 It is my honor to attend today’s celebration of Africa Day. On behalf of the Chinese Embassy in Somalia, I would like to express congratulations. May 25 this year is the 56th birthday of Africa Day, we are here getting together to celebrate the tremendous achievements in 56 years made by Africa, and proud of the profound friendship in 56 years forged by China and Africa.

At present, we meet at a time when the world economy is facing both expanding opportunities and rising challenges, complicated by profound and rapid changes in the world. But for a long time, China and Africa have sincerely treated, mutual understanding and support, China-Africa friendship has withstood the test of time and fluctuating international situation. China and Africa have long formed a community with a shared future and a win-win interests. Developing solidarity and cooperation with African countries is an important basis of China’s foreign policy and a long-term and firm strategic choice of China.

China-Africa economic and trade relations have developed rapidly. In 2018, China-Africa trade volume reached US$ 2014.19 billion, up 20.1% year-on-year, and Africa’s exports to China increased by 30%. China has maintained its position as Africa’s largest trading partner for 10 consecutive years. China has become the fastest growing market for Africa’s exports.

China’s non-financial direct investment flow to Africa amounted to US$3.16 billion, an increase of 2.9% over the same period last year. At present, China’s investment in Africa totals more than US$110 billion. According to incomplete statistics, for a long time, China has helped Africa build more than 10,000 kilometers of highways, more than 6,000 kilometers of railways, more than 20 airports and terminal buildings, more than 30 bridges and ports, more than 80 power projects, and about 150 stadiums, conference centers and parliament buildings. China has built at least 25 economic and trade cooperation zones in Africa, creating 41,000 jobs.

China has also helped develop human resources for Africa to train hundreds of thousands of professionals and technicians in various fields, and built more than 300 people’s livelihood facilities such as hospitals and schools throughout Africa.

China actively participates in African peacekeeping. China supports for the building of the African Standing Army and of the Crisis Rapid Response Force. China is the largest contributor of peacekeepers to Africa among the five permanent of the UN Security Council and the second largest contributor to UN peacekeeping funds. More than 80% of China’s peacekeepers are deployed in Africa, there are total 2,100 peacekeepers in five African mission areas to carry out UN peacekeeping missions, 75% of the peacekeeping funds paid are for Africa. In accordance with the relevant resolution of the UN Security Council, since December 2008, Chinese escort fleets have launched escort operations in the Gulf of Aden and waters of Somalia. So far, 31 batches of escort fleets, 100 vessels and more than 26,000 officers and soldiers have been dispatched, and a total of 1191 batches of 6595 Chinese and foreign ships have been convoyed.

As you know, because of the unilateral tariffs on Chinese goods imposed by the US, Chinese side has taken counter-measures to safeguard international rules and the multilateral trading system. I would talk about it here.

China and the US are the second and first largest economies in the world respectively. Sino-US economic and trade relations are not only related to the development of the two countries themselves, but also related to the prospects of the world economy. Starting a trade war will harm not only others, but also oneself, there will be no winners in the trade war, which will harm not only to China, but also to the US as well as the world. Recently, the US agencies such as the American Soybean Association and the US-China Trade Commission have called for an end to further tariffs raised by the US government, the American Equipment Manufacturers Association has also warned that imposing tariffs on the Chinese goods would have terrible consequences for the US manufacturers in the industry and could even reduce the US employment by up to 400,000 jobs in the industry. Now more and more people are feeling the impact of raising tariffs. The US businesses and consumers are victims. Raising tariffs won’t solve any problem. China doesn’t want a trade war, but is by no means afraid of fighting one, we have the resolve and capability to defend our lawful and legitimate rights and interests.

First, as far as China’s economy is concerned, the impact of a trade war is completely controllable. In the second half of last year, we implemented measures to stabilize employment, finance, foreign trade, foreign investment, investment and expectations, which have achieved considerable results. We will further implement the “six stability” measures to maintain sustained, healthy and stable economic development in China.

Second, China’s economy has a complete industrial system, a huge market, strong resilience, a large space and a bright future. Over the next 15 years, China market will expand further and its development will be more comprehensive, China will import $24 trillion of commodities, absorb $2 trillion of foreign direct investment, and total foreign investment will reach $2 trillion.

China has always opposed unilateralism, trade and investment protectionism, and advocated rational solving of differences and problems in trade relations. China safeguards the the multilateral trading system, promotes the building of an open world economy, and resolutely opposes trade and investment protectionism. The threat of unilateralism and protectionism to the world economic growth has aroused widespread concern and opposition worldwide. China is ready to work with other countries to jointly safeguard the free trade and multilateral trading system and firmly safeguard the common interests of all countries in the world.

China insists on solving Sino-US trade disputes through negotiations, but the negotiations should conform to the general direction of China’s reform and opening up, to China’s fundamental need for high-quality development, and to the common and long-term interests of the Chinese and the US peoples. When negotiating with any country, China must uphold its sovereignty of, its people’s interests of and its dignity of the nation.

We hope the US can work with China to meet each other halfway, address each other’s legitimate concerns and strive for a mutually beneficial agreement on the basis of mutual respect and equality. It will serve the interests of both China and the US and is the shared expectation of the international community.

Finally, I would say that Somalia is an important country in the Horn of Africa. AMISOM and UNSOM have made tremendous contributions to the peaceful development of Somalia and the stability of the region. The international community should increase its support to AMISOM and provide it with stable, predictable and sustainable financial support. So far, China has provided AMISOM with cash assistance for nine consecutive years. China is ready to work with the international community to actively play a constructive role in realizing peace, stability and development in Somalia and the Horn of Africa.