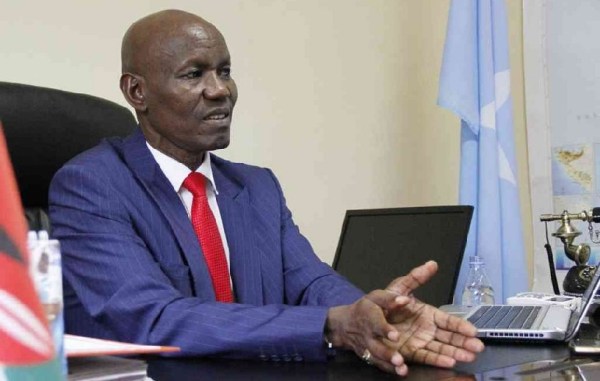 Kenya has recalled its ambassador to Somalia Lt. Gen. Lucas Tumbo after it emerged that oil and gas blocks in disputed territorial areas were auctioned to the United Kingdom.

“The Federal Government of Somalia has sadly demonstrated that it has not yet attained and embraced political maturity and diplomatic stance of a normal, well-adjusted and properly functioning modern government,” he said.

Speaking during a Press conference on Saturday, Amb. Kamau further termed the move by Somalia to auction oil and gas blocks in disputed territory as ‘tragic and regretful.’

The auction apparently took place in London on February 7, 2019.

Amb. Kamau criticised the Somali Government for taking for granted the support of the Kenyan Government through political and humanitarian hardships.

In a strongly worded statement, the Foreign Affairs CS said Kenya regrets the action as it has ‘severely undermined the existing cordial and brotherly relations’ between the two countries.

He said the move has compromised half a century’s worth of dedication and cooperation between Kenya and Somalia.

Two days ago, the Somali government said it would award exploration licenses to foreign oil companies despite calls from the opposition to wait until laws and regulations governing the oil sector were in place.

“There is not a clear consensus about how the oil sector could be managed in Somalia,” Barnaby Pace, an investigator for the NGO Global Witness, which exposes corruption and environmental abuses, told VOA.

“And once Somalia makes deals like the one it’s proposing, it may be locked in for many years and find it difficult to renegotiate or change them to best protect itself,” he added.