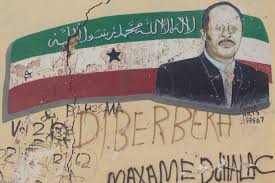 Journalist and social media activist Abdimalik Muse Oldon was sentenced to three and a half years in prison in Somalia’s self-declared state, Somaliland, despite the glaring absence of a plaintiff.

This statement was originally published on africafex.org on 10 July 2019.

The African Freedom of Expression Exchange (AFEX) deplores the sentencing of journalist and social media activist, Abdimalik Muse Oldon by a court in Somalia’s self-declared state, Somaliland. The Marodi Jeh court based in Hargesia, Somaliland capital on July 8, 2019 handed down a three and a half years in prison sentence to the journalist for defamation.

Lawyers for the journalist have slammed the verdict as an “injustice” and indicated that they will put in an appeal.

“Today is another black day for freedom of the expression in Somaliland. Journalist Oldon has been sentenced to three and a half years [even though] there is no single plaintiff in the case,” defending lawyer Jamal Hussein Ahmed said. “We shall of course react and appeal against this injustice.”

Local rights groups have condemned the judgement as unfair, adding that it is “a state-organized campaign to influence the judges at the court against Journalist Oldon,” a local press freedom organization said in a statement issued on July 8, 2019.

Oldon was arrested on April 17, 2019 following reports and comments he made on social media which were deemed to be critical of the government.

This is the second time the journalist has been sentenced on defamation charges within the past two years. On April 8, 2017, a presiding judge, Ahmed Dalmar Ismail, found Oldon guilty of breaching articles 212 and 328 of the penal code and sentenced him to two years in prison. He was accused of making comments against the Somaliland president. Oldon was subsequently released in 2018 following a presidential pardon. He was however rearrested in April 2019 for his continued critical reporting about the Somaliland government.

AFEX vehemently condemns the jail sentence against Oldon. The sentence is a blatant abuse of power by authorities in the country. The constitution of Somaliland guarantees the fundamental right to expression and the government, just like any state, has a responsibility to ensure that journalists and citizens exercise this fundamental right without interference or restrictions from any quarters. Government officials occupy public offices and they must therefore be receptive to more criticism.

The sentencing of the journalist also infringes on the landmark ruling by the African Court of Human and People’s Rights, which overrules the imprisonment of journalists over defamation charges. AFEX therefore finds the conviction of Abdimalik Muse Oldon to be a disproportionate interference in his fundamental right to free speech which is engraved in national and international frameworks.

We therefore call on the authorities to review the jail sentence and release the journalist to enable him to continue his journalistic duties.