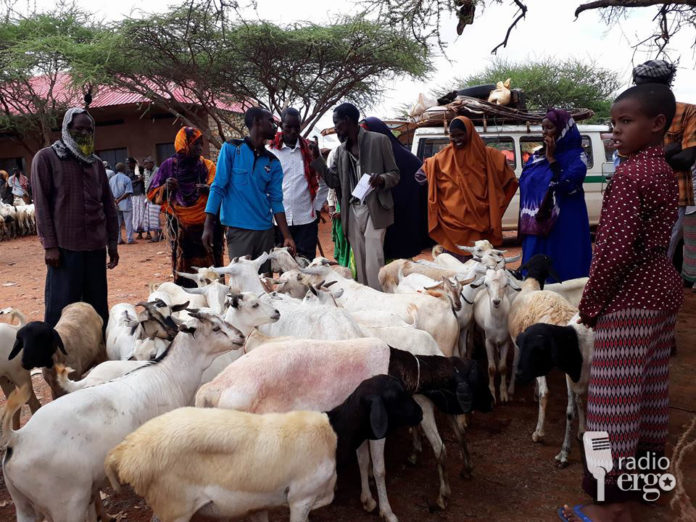 Osman Botan Mohamud, 49, a father of eight, has just returned home after receiving 15 goats from the Drought Response Committee in Somaliland to replace his losses in last year’s tropical cyclone.

He is one of 600 people in Salal, Awdal, Gabiley, and Saahil who lost their livestock in cyclone Sagar, which wreaked havoc in the area in May 2018.

Osman got the coveted livestock on 29 March and returned to El-Sheikh, 65km from Abdigedi village, where he was living temporarily for nine months.

He used to be the proud owner of a large herd of 200 goats, but only 10 survived the cyclone. Sagar was the strongest cyclone ever recorded in Somalia.

He and his family lived in a shelter made of plastic sheeting donated by government and aid organizations in Abdigedi.

Their sense of hope in this remote village in miserable conditions was reduced to dependency on aid hand-outs.

At one point they went without any aid for two months.

Osman sold off five of the goats for $37 to get some income for his family to have a meal. He saved the remaining five goats for milk.

In the nine months in Abdigedi, he says he received $103 in cash aid from Save the Children.

But the best gift has been this new stock of goats that allowed him to go home and pick up his livelihood of pastoralism.

Osman noted that the goats were still very young and couldn’t produce milk or be sold off as yet, so he is collecting and selling firewood for the time being.

“I would like to go back to my previous life so that I can enrol my children back in school. NowI am back in my village and I am earning 30-40,000 Somaliland shillings from the sale of firewood,” said Osman.

The director of the drought response committee in Somaliland, Feisal Ali Sheikh, said they held consultative meetings with the local elders to identify the 600 worst affected families and distributed 900 goats based on their needs.

He said although the 15 goats are a poor substitute for his original herd of 120, he is happy that he can plan to get milk, meat or even sell the goats for quick cash.

“The goats will have a huge impact on our lives, they will restore our livelihood in the rural areas. I will strive to take care of these goats so that I don’t go back to living as an IDP,” said Adan.

Adan lived displaced in Lughaya for a year and returned to Gargara, 60 km north of Borama, on 5 April with his new goats.