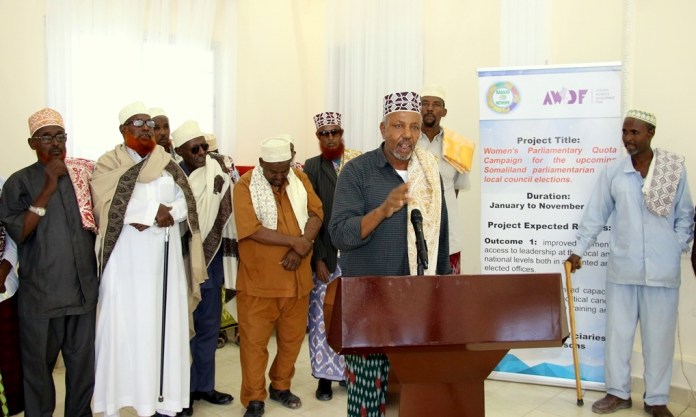 Hargeisa-A press conference held last Thursday by the elders and intellectuals of the Maroodi -jeh region supported the participation of Somaliland women in the leadership and governance of the country and called on the country’s legislatures to approve the quota for women in the electoral law which submitted by the President. The elders also sent a signal to the parties urging them to support women’s participation in the Leadership.

Aqil Yassin Yusuf Farah speaking during the press conference said, “We, the traditional leaders of the Maroodi Jeh region , support the Somaliland women who are politically ambitious and want to take part in governing the country. “Women are one of the backbones of Somaliland. Their effectiveness has been recognized and their performance has been recognized. In this regard, we, the traditional leaders of Marodi Jeex region, support the fact that the councils should give the share that the president has approved for parliaments. “As Muslims, we allow women to do what is allowed by Islamic law,” said Aqil Yusuf. “We urge the traditional elders of Somaliland to support our request and our proposal to support the women who are politically ambitious and educated in Somaliland,” he said.

Aqil Adan Gahnug Ali also spoke at the event and said, “Women in the past were not educated, they were not educated because of cultural issues, but today they’re more educated than men and Islamic law does prevent them so we should allow them to participate.

Traditional leader Hassan Ibrahim Hussein speaking during the press conference said, “We are here to support our women demand their rights and also to urge the two national assemblies to approve the quotas in the electoral law and for the three political organizations to support them.  “The party cannot stand without women and the government cannot stand without women, so we have a duty to uphold what Islam commands us to do and to give women their quota to govern their homeland,” said Aqil Hassan.

Agil Mohamed Hassan said, “I would like to urge fellow elders who are not here today to support our women in achieving their political ambition, because of such empowerment Illhan Omer can now question the likes of President Trump and we have hundreds of Illhan Omer that’s why we ask the political parties to implement it and the two national assemblies to urgently approve the quotas.

Aqil Mohamed Hirsi Farah another traditional leader who spoke during the said, “We the traditional leaders are supporting your mission and every lady should be accorded her rightful share. We as the elders we urge the President to support them in getting their quotas.

Lastly, Aden Osman Yusuf said, “Traditional leaders and women of Maroodi Jeh region stand together and we urge the three political parties and the two national assemblies to follow suit and give the women of Somaliland give the quotas the President of the Republic of Somaliland approved.