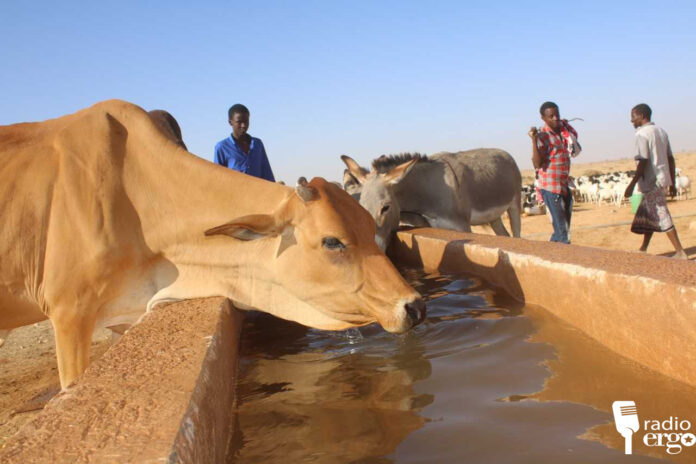 Abdilaahi Ali Hassan, an agro-pastoralist in Somaliland, supplies free water to pastoralist communities stricken bydrought from the reservoir he built on his landfour years ago. It is located on his land in the rural area 53 km east of Bura’o town.

He began his humanitarian mission when he realised the drastic toll the drought emerging in 2016 was taking on pastoralists, as many livestock were dying. To mark International Humanitarian Day, Radio Ergo spoke to him about his efforts to help others in need. The interview is transcribed below.

Abdilaahi: It was when one large extended family lost all their livestock, just two or three animals survived, and they had nothing to sell.  The camels and goats all perished and there was barely any water anywhere.

The drought was the worst, the condition of those people was getting worse, and inaddition to that, there was also disease ravaging the community.

I started giving them water. Sometimes I gave them maize from my stores to feed their livestock. I used to get fruits from the farm to support those among them who were malnourished.

Ergo: How many desperate families did you help?

Abdilaahi: I could not tell you the exact figure, but there were many people.

Ergo: Did you sell the water to them?

Abdilaahi: No, I was supplying them for free.

Ergo: What is the capacity of your reservoir?

Abdilaahi: It is 300 metres long, 250 metres wide and 2.5 metres deep.  It is notcemented or floored with waterproofing, we just dug it with bulldozers and left it that way.

It was filled up by the rain last gu’ rain and we are still using it both for domestic use and for irrigation.

Ergo: How does it make you feel to help needy people who lost their livestock and haveno money to buy water?

Abdilaahi: I feel like I am carrying out my responsibility by helping my neighbours and the needy people nearby for as long as I can.

I have never sold any of this water. Apart from what I use for my own purposes, I give the rest to the people for free. My main aim in building the reservoir was for irrigation.

Ergo: How many families would you say you serve with water every day now?

Abdilaahi: It varies, but per day about 20 families get water from this reservoir.