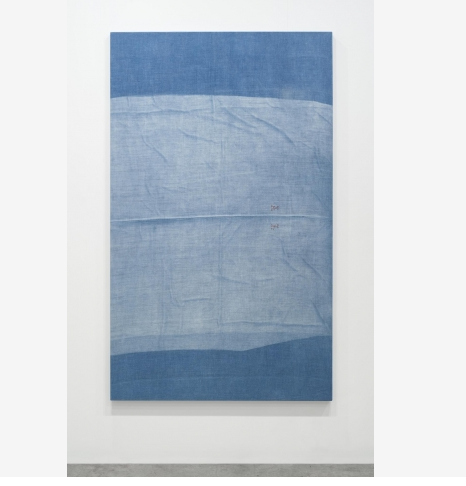 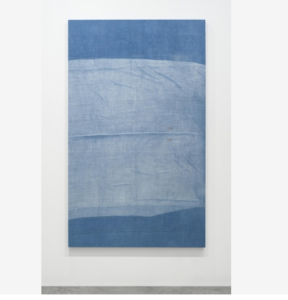 “Here the foundation or basis of her pictures is not the usual canvas that is commercially available; she uses found, often historic materials, which already carry their own (life) story. In places, fragments of embroidered ornaments or lettering emphasize a personalised quality to the material. In the choice of color, she also pursues her own direction,” says the museum website. Her forte lies in connecting African handicraft traditions with elements of Western abstract art.

Farah repurposes pieces of linen and jute — often sourced from 19th century homes — by dying them with natural pigments such as indigo and marigold, usually grown herself, before exposing them to long periods of sunlight in the open air. Often taking months or even years to complete, the resultant bleaching lends her work an ephemeral quality that manifests both the passing of time and the essence of the location in which they were made.

In her patchwork paintings that she refers to as ‘Maps,’ Farah incorporates scraps of excess fabric salvaged from the production of older paintings, stitching them together to create one multi-faceted piece that comprises materials spanning both time and place. “Built intuitively, each of these works reflects the sustainable nature of Farah’s practice and how the artist actively engages with natural processes in order to make her paintings,” writes Pippy Houldsworth Gallery, which represents the artist. She also works in mediums like installation, photography, video and sound-art.

She establishes a continuum between the outside world and the gallery space by encompassing raw materials collected from far-flung locations, often mixing her dyes with mud from the Dead Sea, terracotta from Mexico and clay from Sweden. “Even though her paintings hang flat on the wall, the artist seeks to emphasize the three-dimensionality of the works and their relationship to the space and the body of the viewer,” says Pippy Houldsworth Gallery.

Farah was born in Sharjah, United Arab Emirates, in 1978 to Somali parents and grew up in Stockholm, Sweden. She lives and works in London. She received a B.A. in Fashion Design from Middlesex University (2003), a Postgraduate Degree from Central Saint Martins College of Arts and Design (2006), followed by an M.A. in Painting from the Royal College of Art, London (2012).