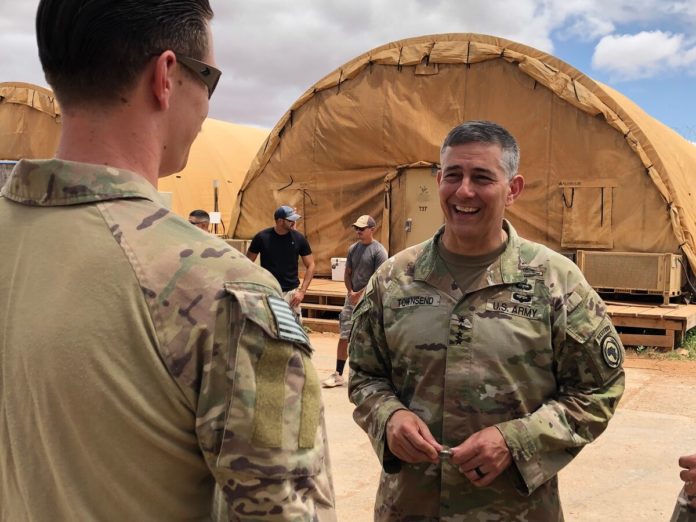 U.S. Africa Command commander Army Gen. Stephen Townsend is in Somalia to visit U.S. troops and other global leaders — a move that comes amid a slight uptick in airstrikes against violent extremists in Somalia this year.

“The purpose of my engagements is to meet with important African, international and U.S. key leaders, to visit our troops and to assess the progress of our campaign in East Africa and against al-Shabaab,” Townsend, who had headed the command since July, said in a statement.

Townsend is slated to visit Somali President Mohamed Abdullah Farmaajo on Nov. 5, according to AFRICOM. He visited Djibouti on Monday.

Townsend claimed that violent extremist groups, including al-Shabab, an al-Qaida offshoot, and ISIS-Somalia, aim to target the U.S., and pose a threat to U.S. interests and African partners.

“Due to persistent pressure our campaign puts on al-Shabaab and ISIS, we believe they lack the actual capability to attack our homeland but we must stay vigilant and keep pressing them,” Townsend said.

The command estimates that there are between 5,000 to 7,000 al-Shabab fighters in Somalia, and approximately 150 to 300 ISIS-Somalia militants.

“The number of al-Shabaab militants has remained relatively stable, but their hold on territory has significantly declined,” Karns said. “The loss of ground equates to loss of ability to influence and negatively impact more innocent Somali futures.”

Airstrikes conducted against the militants are designed to foster organizational discord and “afford time and space for advancements in security, governance and economic development,” according to Karns.

“The increase in strikes has increased confusion within the terrorist network and has impacted their ability to organize and commit acts of violence and terror against innocent people,” Karns said.

Approximately 650 to 800 U.S. forces are in Somalia at any given time, Karns said. A key responsibility for AFRICOM forces is instructing and building ground forces, including the Somali special operations unit called the Danab.

According to Karns, Somali military forces have been successful in keeping the territory seized from al-Shabab and likewise fending off al-Shabab counter attacks. These successful seizures from Somalia’s government and partner forces have led to gathering important intelligence that aids future efforts, he said.

“This intelligence allows targets to be developed, and ultimately eliminated, through intelligence-sharing, armed overwatch and airstrikes,” Karns said.

“Terrorists need to know we will pursue them relentlessly to disrupt and degrade them today and prevent their spread tomorrow,” Townsend said. “As long as terrorists threaten and try to impose their extreme beliefs on the people and their government, they will not be able to sleep peacefully.”