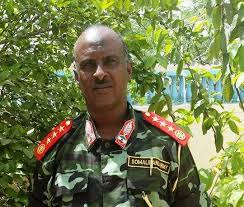 Dabagale succeeds the late Somaliland police boss who died in Hargeisa just a couple of days ago and becomes the 5th police commissioner to lead the police force since its inception.

He will resume his duties with immediate effect. In addition, the president has also named Mr. Abdi Hassan Mire Farah as the Deputy Police Commissioner. The Head of State has relieved the former deputy police commissioner, Mr. Faarah Mohamed Mire from his all duties.