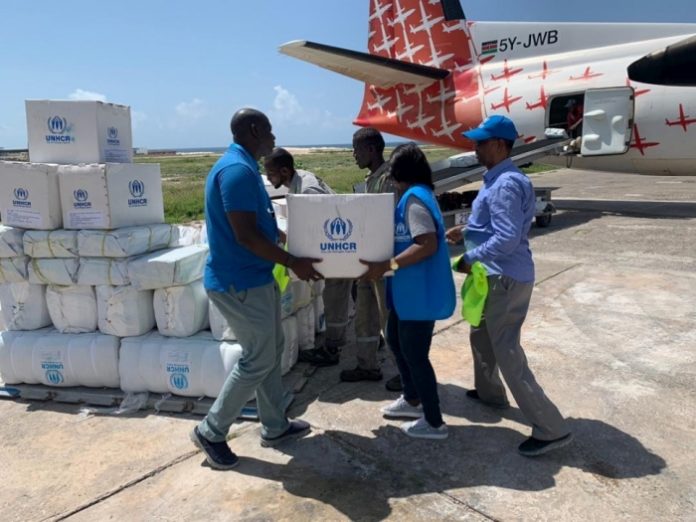 UNHCR staff unload relief items to be distributed to families affected by flooding in in central Somalia’s Hiran region.

An airplane – a Fokker 50 cargo freighter – carrying six metric tons of aid items from UNHCR, the UN Refugee Agency, landed on Monday in Belet Weyne in Somalia’s Hiirshabelle state to assist people displaced by the country’s worst flooding in years.

Monday’s delivery was the first in a series of flights UNHCR is organizing to bring in humanitarian supplies to more than 20,000 people who have been cut off by the floodwaters and can only be reached by air. We are scheduling up to 10 flights – three a day – to airlift a total of 60 metric tons of urgently needed humanitarian relief kits, including jerry cans, soap, blankets, kitchen sets and plastic sheets.

UNHCR will also deliver some 2,000 emergency shelter kits to the area. Additionally, 500 further emergency kits will be airlifted to South West State, where there has also been serious flooding. The air operation largely depends on landing strips being available as floodwaters have engulfed a vast area. Reports by our partners indicate that villages on the outskirts of Belet Weyne have been submerged and hundreds of families trapped in their homes.

The impact of the floods has been devastating for local communities in Somalia, with more than 270,000 people displaced in the last two weeks. The majority – some 230,000 people – have taken shelter in Belet Weyne town and are in urgent need of humanitarian assistance.

Somalia has shown progress in dealing with both armed conflict and drought, but remains fragile, with an internally displaced population of some 2.6 million.

The floods highlight Somalia’s increasing vulnerability to the effects of climate change. In July this year, humanitarian agencies had launched a drought impact response plan following below average rains, resulting in a severe drought conditions in the country.

Given the latest developments, an immediate humanitarian emergency response is crucial UNHCR and partners have mobilized $2, 585 million USD for the response, with a gap of a further $11,865 million USD required to meet the humanitarian needs.