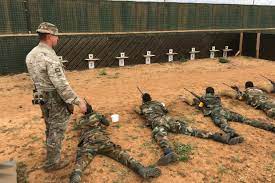 The British government said it will increase UK troops to Somalia’s training mission.

They will be sent to Somalia to bolster the training provided to members of Somalia’s army.

Initially, hundreds of UK troops are ready to be dispatched to Somalia within a matter of two months to reinforce the ongoing efforts to build Somalia’s robust army which will be capable of flushing out AL Shabab and Deash from Somalia.

The UK infantry soldiers will train Somalia’s infantry by providing awareness skills in the infantry.

UK troops were based in Somalia and will plan the military operations aimed at flushing Al Qaeda affiliated groups from Somalia’s soil which is due to start at the end of 2022.

Scores of UK troops were stationed in Somalia and were training Somalia’s army members but the UK said it is committed to increase the number of its troops in Somalia.

The British soldiers are currently offering training to Somalia’s army particularly the 60 division which is operational in Biadoa and Mogadishu sector.