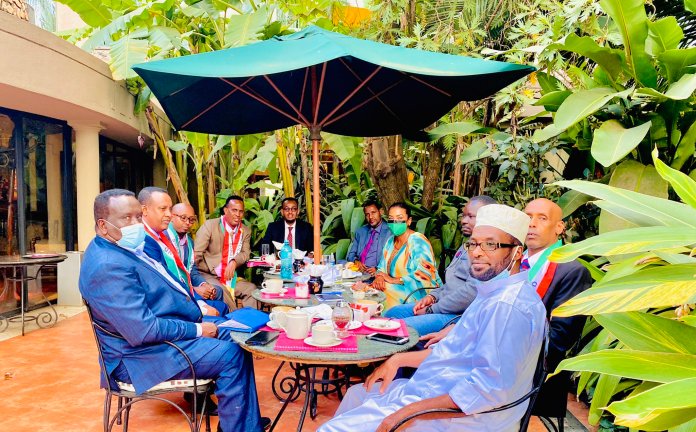 Members of the Foreign Policy and International cooperation committee of the Somaliland House of Representatives, led by Committee Chairman Mohamed Jama Kodbur who traveled to Nairobi on 27th October, for a working visit met their counterparts, Kenyan MPs, yesterday.

Ismael Shirwac, Head of Development Partnerships at the Rep of Somaliland mission in Kenya, stated that both sides had a series of productive meetings on wide range of matters of mutual interests that has been discussed.

Hon. Jennifer Shamalla, Kenyan MP, reacting to the meeting, stated in her Twitter account, “Absolutely delighted to have met with Members of Parliament of The Republic of Somaliland, this afternoon. I look forward to visiting this incredible country, especially Laas Geel which contains some of the earliest known rock art cave paintings”.

The visit of Somaliland lawmakers to Kenya comes as a large delegation led by the Foreign Minister visited the country last week and met with the Kenyan government officials and international diplomats.

on June, this year,  In response to a series of contacts and meetings between the leaders of the Republic of Somaliland and the Republic of Kenya at various levels, a parliamentary caucus to further cement vast, budding relations between the two countries was launched Friday in Nairobi.