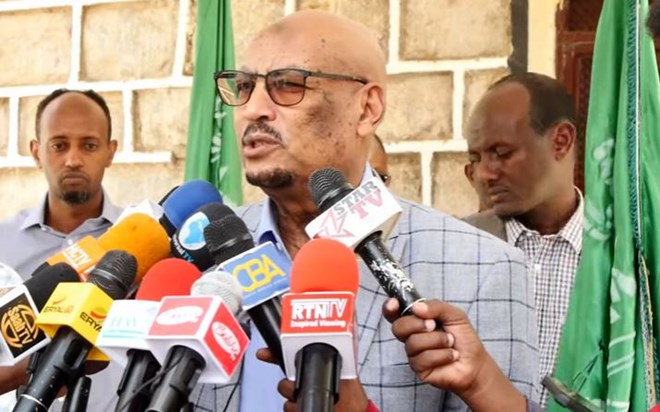 The chair of Justice & Welfare Party-UCID, Mr. Faisal Ali Warabe on Tuesday has scathingly blasted on president Bihi’s poor leadership and failed to honor election dispute promises. UCID Chair said that the thorny issues that Bihi’s administration failed to resolve range from the Tukaraq, inter clan skirmishes in Eil Afweyn and holding the upcoming parliament and local council polls in Somaliland. Mr. Faisal clearly stated that the gov is not serious on elections. He added that the local councils are still in office after their terms expired. He revealed that Wadani’s rejection on the upcoming polls won’t be the scapegoat for the gov. The party clearly noted that the ball is in the president’s court. He accused of the current administration of failing to honor their promises and that the country’s leadership is in gridlock. Speaking on the inter clan skirmishes in Eil Afweyn, he said that this a human tragedy. He took for instance that any human that kills another human will go to hell as revealed in the holy book. The chair party urged the warring clans to lay down their arms and observe the peace. He also blamed on the recurrent Eil Afweyn killings on the shoulders of Kulmiye successive leadership.