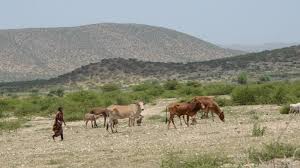 HARGEISA, Somaliland — If she were to meet someone from her past life, Halima Dahir Mahmoud is not sure they would recognize her. She’s lost weight and is constantly stressed. She was once a nomadic herder who would roam the Ethiopian countryside with her 200 sheep and goats, and 50 camels. Now she lives in a displacement camp on the outskirts of Somaliland’s capital city of Hargeisa.

“One of the things I miss the most is the fresh air,” she said.

A few years ago, her animals started dying because of a regional drought. Eventually, there were none left. Her family left Ethiopia and walked 12 hours until they reached the displacement camp where they now live.

“If you experience drought year after year, you become weak and vulnerable.”

In the past, she had more agency over her own life, she said. Her family lived off of their livestock, selling a few when they needed cash. Now they are dependent on aid.

Drought has burdened the region year after year since 2015, killing off livestock and crops. Globally, there has been an increase in the intensity and frequency of extreme weather events. In the Horn of Africa, scientists have linked climate change to frequent drought conditions.

“We’ve faced five years of consecutive drought in this country. Livelihoods have collapsed,” said Mohamed Abdalle Hussein, director of administration and finance at the National Disaster Preparedness and Food Reserve Authority in Somaliland — a region that unilaterally declared independence from Somalia in 1991, although this is not internationally recognized.

In the past, there was typically a buffer zone of good rainy seasons in between droughts that allowed people to recover and rebuild their assets, Hussein said.

“Drought is a common disaster we’ve always faced, but the interval has changed. Before, it was a five to seven-year interval between [periods] when we experienced drought. Now that interval has decreased to one to two years,” he said. “If you experience drought year after year, you become weak and vulnerable.”

With this new reality, the aid sector and local governments are faced with the need to shift the existing emergency response to a development approach that responds to long-term displacement and increases resilience among communities, with a focus on how to preserve their livelihoods.

In the past decade, the Horn of Africa has been hit by repeated disasters. A famine in southern Somalia in 2011 killed nearly 260,000 people, and another was narrowly averted in 2017.

Northwestern Somaliland and Djibouti were also struck by an unprecedented cyclone last year, bringing a year’s worth of rain in only a few days, which killed animals and flooded crops.

This year, rains started late and were insufficient, resulting in drought conditions across Somalia. The Famine Early Warning Systems Network estimates that 2.2 million people will experience crisis and emergency food insecurity through September.

In agropastoral areas, maize and sorghum production is expected to reach only about half of normal levels this year. Meanwhile, funding for food assistance is falling seriously short.

A key strategy in building resilience in the region is to promote climate-smart agriculture. Since a lack of water is the main problem, aid groups are working with communities to set up basic rainwater harvesting systems that store water in underground tanks or plastic-lined pits, to help keep crops alive during dry periods.

Concern is also teaching techniques such as crop spacing, creating sheltered nurseries, using organic fertilizers and pesticides, proper post-harvest treatment, and constructing soil bunds —  embankments constructed from dirt — to conserve the topsoil and surface runoff water. It works with “lead farmers” in communities, helping them to create demonstration plots to showcase the techniques. The hope is that other farmers in the area visit the plots to learn how to change their own practices.

But because pastoralism is a dominant way of life in many parts of Somalia, there is a lot of capacity-building needed in developing the agriculture sector and convincing people to adopt this type of livelihood, she said.

Yurub Hussein Mohmoud lives in a displacement camp that’s taken on a more permanent look — 350 concrete housing units constructed by UN-Habitat with support from the Japanese government. She’s lived in the camp for four years following the death of all her livestock from drought.

For Mohmoud, there is no turning back to her life of agropastoralism. She prefers life in the displacement camp where she has her own shop selling food, shampoo, diapers, cigarettes, and camel’s milk.

Mohmoud is involved in a EU Emergency Trust Fund for Africa project aimed at creating long-term solutions for displaced populations. As part of the program, she received a year-long training to develop her business skills, was placed in a women’s savings and loans group, and received a cash injection of $165 to jumpstart her shop.

“There is a huge difference between the woman standing in the hot sun, digging holes in the ground, and the woman that takes a shower in the morning and comes to her shop,” she said, laughing. “I’m happier where I am now.”

Beyond business grants like these, a major part of the humanitarian response in recent years has been the use of cash transfers, often through mobile money, that aim to provide life and livelihood-saving support to vulnerable families across Somalia.

But these are humanitarian cash transfers, meaning they are delivered for short periods of time. This can make it difficult for families to invest in the long-term rebuilding of their livelihoods.

Moving forward, there are hopes these transfers could evolve into a national social safety net program, eventually led by the federal government, which would include providing cash transfers to targeted individuals throughout the year.

“It would be good to have a safety net — a long-term, predictable safety net in Somalia — that would cover the basic needs of a good proportion of the population on a constant basis,” said Alessandro Bini, director of the Somali Cash Consortium.

The expectation is that, if consistent cash transfers are provided throughout the year, there will be less of a need for large emergency responses during droughts or other emergencies.

Conversations are ongoing with both the humanitarian and development donor communities and the Somali government on the scale and scope of a potential program, Bini said. Ongoing challenges include the varying funding mandates of different donors, government capacity, the lack of national identity cards, and financial sustainability.

The humanitarian sector has a consistent caseload of between 500,000 and 1 million people in need of aid in Somalia, said Quentin Le Gallo, technical assistant for Regional Drought Coordination for the EU’s humanitarian arm.

“They need longer-term assistance and solutions,” he said. “The idea is, if we have a safety net, there would be triggers and early warning systems in place so that once the situation starts to deteriorate, then we can act quickly to protect the assets of these people.”