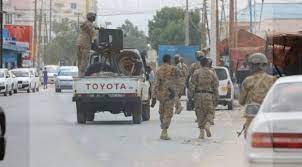 Tension is running high in the coastal town of Bosaso after Puntland authority threatened an assault against army mutineers it claims to have organized by Somali Federal Gov’t. The governor of Bari region said on Thursday authorities were preparing to launch an offensive to quell the mutiny and thwart ant-security efforts, after dozens of vehicles ferrying troops entered the town over the past days. Regional forces and the mutineers have taken up new positions in the town of Bosaso, where locals have started to flee their neighborhoods due to fear of clashes. Road traffic of cities in the region with the coastal town have also been suspended and dozens of vehicles were stranded in the nearby town of Armo after they had been told not to continue their trip until further notice. Efforts by regional elders and politicians to mediate an end to the tensions, nominally over president Saed Deni’s dismissal of the Commander of US-trained elite force Mohamed Osman, have come to no avail. Deni insisted on keeping his promise to the people of Puntland to ensure that armed forces do not remain in the hands of families or individuals, and said he would not tolerate activities that are hampering region’s security. Sacked PSF Commander continued his defiance of the president’s decree and still refuse to leave the post. Dozens of troops with military vehicles are seen at the streets of Bosaso and inside the neighbor hoods and residents raised fear that confrontations could break out any time if both sides fail to end their differences through dialogue.