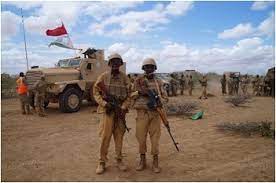 Three people killed in an overnight skirmishes between African Union Peacekeepers backing Somali government troops and Al-Shabab militants in the town of Baladwayne in central Somalia’s Hiran region. Militants raided bases manned by allied forces inside the restive town on Wednesday night, triggering a heavy gunfight that lasted for hours. loud explosion of gunfire and mortar explosion were heard overnight throughout the night, locals said. Three young sibling boys died after mortar shells exchanged by both sides hit their home in Holwadag district of Baladwayne. Al-Shabab claimed responsibility for the overnight attack on military bases in Baladwayne. The attack comes days after Djibouti’s African Union troops stationed in Baladwayne carried out an operation aimed at improving security on the outskirts of the town on Wednesday. Militants raided AU military bases in the nearby town of Buloburde in Hiran region. There were no casualties on civilians in the ensuing gun battle.