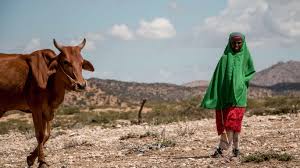 Somaliland experienced Successive poor rains and recurrent droughts in the last several years. But lack of exercises of pre-famine conditions in the country dramatically weakened the resilience of pastoralist and farming communities. Besides the economic damages, droughts can compromise ecosystems and threat food security in the most vulnerable countries like Somaliland. The worst affected areas of these previous droughts have been recorded as up to four times higher than the emergency threshold standard. In certain areas 100% of the livestock have died due to such droughts; that mean even after the dry season ended, these people’s livelihoods have been destroyed. It was estimated that 60% of Somaliland’s livestock died within the last five years; that is only 40% of the livestock remain in the rural with very severe conditions. Thousands of displaced families gathered in unrecognized IDP camps at the out scares of all Somaliland towns. These people are now standing there with empty hands in such camps; and are in a severe malnutrition, starvation and in need of food, clean water, basic sanitation, new livelihood sources and education for their children.

The devastating impact of the previous droughts caused an acute livelihood crisis for nearly half a million people, who directly depended to their driven-out livestock. Unfortunately, the previous government invited this crisis with no response except appointing a drought emergency committee who did nothing for the actual vulnerable population. This government also failed to do the least for these thousands of families affected by the previous droughts. As we know, drought affects everyone in the state, from pastoralists to farmers, villagers, and the urban community. Beside the above mentioned disaster already on the ground, it is likely inevitable to face another new severe drought that may come in the near future; if this coming rainy season fail to rain. And if a new drought rises sometime in the near future; it will worsen the misery index of the remaining pastoralist communities in the rural areas; and it will so easily destroy the remaining 40% of the livestock.

If this will happen, and a pre-prepared immediate actions will not be taken earlier; a loss of the remaining livestock and even human lives on a massive scale is a very real risk that Somaliland is facing. It is shame that our government did not learn a lesson from the hardships caused by the droughts; sitting idly waiting the crisis to come again with no single preparatory step taken to minimize the impacts. Our governments did not take a proactive approach to dealing with droughts; they tend to focus on drought issue when its degree reaches the emergency state. And now is the same without sense of preparation to avoid another humanitarian crisis caused by droughts. This certainly adds to the public’s perception that government is not doing its job as it simply makes verbal reactions when crises strike.

Whole communities and Livelihoods throughout Somaliland have been imperiled by the recurrent droughts, without any plans or rescue actions over those many years. Though every one of us has a role to play; but the government has the mandated responsibility of saving its people from the risks of droughts and famines. I see the same attitude over and over again – that we simply declare a national emergency when the drought already affected the pastoralists; and nominating unproductive drought fund raising committees. The remaining herders are now on a desperate effort to keep their livestock alive because right now we are already within a new drought. In droughts making the transition from crisis to risk management is difficult; because little has been understood and has been done to address the risks associated with droughts. To the contrary, how we react to drought management is a failed formula and is far different from how this natural phenomenon is globally addressed.

The government must stand up to do something about these recurring natural phenomena. We must anticipate the inevitable — that drought will come and go — and take an approach that seeks to minimize the effects of drought when it inevitably occurs. The government must take proactive approach that entails the planning of necessary measures to prevent or minimize drought impacts in advance. Then the government should react and respond by preparing in advance all required rapid emergency aid items, to meet the immediate needs of the people as well as their livestock; in order to save lives and sustain their livelihoods with good resource management; so that people can rebuild themselves once the crisis is over. There’s no time to waste, the government and the people must not stand by and watch this tragedy to come again to the helpless Pastoralists remaining in the rural with their livestock.

Drought risk management needs assessments to be implemented, in order to support the policy makers and managers of related agencies in developing strategies and drought management plan; helping them to save our people from further drought risks. To promote this process, the Government should establish a National Drought Coordination Committee (NDCC) —the right people with academic drought management expertise. This committee should have supplied with adequate data to make informed and equitable decisions during the process. NDCC should immediately develop and launch written guidelines for the preparation of the drought management plans; to assist the government through the process of identifying specific actions that can be taken to reduce short-and long-term drought risks. These Guidelines should focus on the steps that relate specifically to the environment of our country; and must be designed to be a straightforward, practical and proactive approach tool applied to do all preparatory things, before droughts occur. This guiding draft should be focused and narrowed as step-by-step process to identify high priority actions that can be taken to reduce potential drought-related impacts before droughts occur.

In order to reduce the potential identified drought impacts before it occurs in the future; it is necessary to understand the underlying environmental, economic, and social causes of the impacts. Then the issues that make people vulnerable in the first place should be addressed. All information, data and things that the identified causes could be feasible, cost-effective, and equitable should be utilized. In this manner, true drought vulnerabilities can be addressed that will subsequently reduce drought-related impacts and risk. Then long-lasting programs that will cushion pastoralist from the effects of prolonged droughts can be implemented. If we take this type of proactive approach drought management, it will help to bridge the gap between the hard times that our vulnerable struggling communities are in lack of livelihoods and their drought recovery times. This system also will function as a national store to meet further drought emergencies; and-most important of all-as the concrete means of developing a steadily higher living standard for all Pastoralists including to preserve seasonal grazing areas and water sources.