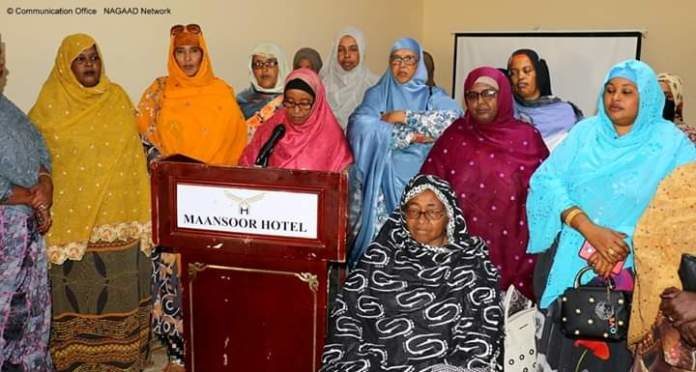 The women fraternities have expressed their concerns of fear for the country to be submerged into political instability following the impasse on the electioneering processes, terming the delays as violation of civil rights.

Under the umbrella women organization, the NAGAAD Network that brought together diverse women groups notably from the political parties decried the lack of commitment by the election stakeholders to address the issue and urged them to deflate political tension and see to it that the processes continue smoothly and unhindered. They also called for women inclusion in decision making processes.

Below is their press statement circulated yesterday evening:-

PRESS RELESE: THE DELAY ON THE UPCOMING PARLIMENTERYAN AND LOCAL COUNCIL ELECTIONS.

NAGAAD Network led a meeting with the women of the three national parties, on how the recurrent delays of parliamentary and local council elections affects the country’s political stability and democratization process. Somaliland women are disappointed with the lack of commitment of the Somaliland government, the three political parties and the parliament to avoid unnecessary delays on the elections, and their lack of commitment to take action on improving gender equality and giving women space in political decision sharing. Women have to be appointed higher positions in the government and the political party leadership.

The women emphasize that this prolonged election related disputes violates the civil right to vote and be voted for as stated by article 22 of the Somaliland Constitution. As a result of this meeting, the following recommendations were agreed upon:

The women of the three political parties are disappointed with the unnecessarily recurrent delays on parliamentary and local council elections. They believe that these delays are violating their civil rights to run for the seats in the upcoming elections.

Women of the three political parties urge the Somaliland Parliament approves the Election Law and Women’s Quota in both Local Council and Parliamentary level.

Finally, we are imparting upon the government, parliament, and the political parties that women’s equal participation in politics is a crucial step toward achieving gender equality, the NDP II, the SDGs, and progress for all.