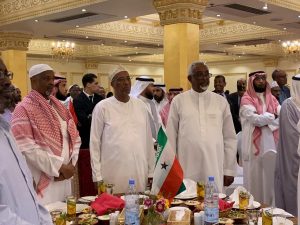 The Somaliland delegation led by President Muse Bihi Abdi have met with community members in Jeddah. In a well organized reception attended by both the Somaliland diaspora and local Saudi businessmen and politicians, President Muse Bihi’s delegation thanked the support of the community and expressed satisfaction with their continued efforts to maintain the strong ties between the two countries.

The President who fullfilled one of the main pillars of Islam was accompanied on the pilgrimage by his elderly mother. In pictures and posts on the social media, the President was seen escorting and aiding his mother during the pilgrimage, not as a Head of a State, but as a son performing his duties.

The delegation which had just completed the annual Hajj pilgrimage are expected to meet with other senior Saudi Arabian officials before returning home to Somaliland.