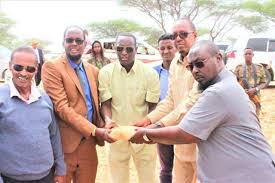 The construction of the dry port will also help ease and enhance the country’s exports.

A delegation headed up by the ports manager, Said Hassan Abdilahi received a cordial reception in the outskirts of Lasanod, Sool’s provincial capital.

Residents from Lasanod and intellectuals ha escorted the delegation to Gambadha which is 30 km from Lasanod.

The dry port will prove to be a milestone in connecting Berbera port to the eastern regions in Somaliland, especially Berbera to rest of Somalia.

“The dry port will serve as commercial hub whereby imported items via the port of Berbera will be made available in Gambadha so that residents from the eastern region could find them in lieu of traveling to the port of Berbera. Purchasers from the neighboring country of Somalia will also come in Gambadha. We had conducted a survey so as to locate the suitable place to construct the dry port and it Gambadha is the right place. The dry port will generate new revenues and create jobs for the locals.”

The ports manager expressed thanks to the reception from Sool residents had accorded.

The national army stationed in Gambadha also received the delegation.

Sool’s provincial governor, Abdikani Jiidh donated the land where the dry port will be built.

The dry port is next to the custom where items purchased will be taxed on the spot.

It is that dry port will facilitate in handling goods that enter or exit Berbera port.